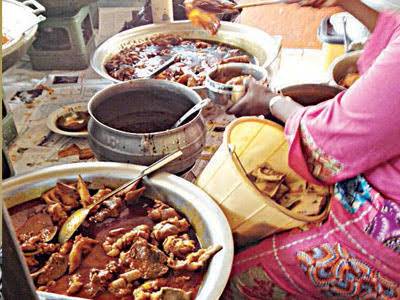 For many households and restaurants, using paracetamol is the fastest way to prepare meat. It saves gas, kerosene or firewood. And costs much less, N50 for one sachet of 12 tablets, and each tablet can cause a pot-full of meat to cook soft within few minutes. It’s an amazing discovery, or so it seems. But what they don’t know is that as much as they are quickening the amount of time it takes to cook, they are also quickening their days on mother earth.

“It’s a lot faster to boil meat with paracetamol,” a young mother, Adeola told this writer upon inquiry. “I have used it to cook cow leg on a number of occasions. If you add one tablet, the meat will melt and become soft in just ten minutes.”

But Adeola is endangering her life and those of her young children. She was in shock to realise this.

Paracetamol, ordinarily, is a killer, when consumed regularly to cure a headache or take care of pains, but when cooked in a pot, it’s a certain expressway to kidney or liver failure.

Medical experts say when paracetamol is used in cooking, it loses the pain killer property and becomes highly acidic and dangerous for human consumption.

When the process occurs, paracetamol is hydrolyzed into what is called 4-aminophenol, which, experts say, is highly very toxic to the kidney and liver.

Investigations by this writer revealed that restaurant owners opt for paracetamol because it helps them save cost and reduce the waiting time for customers.

Recently, there has been a hike in the number of young Nigerian men coming down with kidney failure, most of which result in death on account of poor medical care, part of the reason for that, apparently is consumption of paracetamol/panadol ‘pepper soup’ or meat it is used to prepare generally. Ignorance is proving costly in this regard.

In its 2016 report, the Nigeria Medical Journal noted that Chronic kidney disease (CKD) has so prevalent in the country that it has “become a public health problem in Nigeria.”

But paracetamol or panadol is not dangerous only when cooked in a pot. Regular intake or slight overdose can be equally deadly.

The maximum 24-hour dose of paracetamol is 4g, but as little as 5g, experts say, can cause liver complications, and it can be easy to overdose accidentally by taking more than one product containing it at the same time.

Considered an effective pain reliever, paracetamol is widely used in Nigeria and elsewhere, it’s the number option for cure of headaches and easily the most commonly used drug in the country, if not globally. But its regular use portend danger.

“Continuous use of Paracetamol can cause potentially fatal liver damage. Things get much worse when combined with alcoholic drinks, like origin bitters and in chronic alcoholics or patients with liver damage,” noted medical consultant, Dr Maria Alice.

“Paracetamol is metabolised primarily in the liver into toxic and non-toxic products. Some final products are inactive, non-toxic, and eventually excreted by the kidneys. However, there is an intermediate product that is toxic and is considered to be responsible for liver problems, like acute liver failure, a killer clinical condition.”

But it is not just about the liver and the kidney. In 2013, the US Food and Drugs Administration (FDA) issued warnings that taking paracetamol can, in some rare instances, cause potentially fatal skin conditions called Stevens-Johnson Syndrome, toxic epidermal necrolysis and acute generalised exanthematous pustulosis, which can cause the top layer of skin to become detached.

Paracetamol rose to prominence globally in the 1960s following fears that aspirin and other non-steroidal anti-inflammatory drugs (NSAIDs) such as ibuprofen could cause gastric bleeding, ulcers and other serious side-effects. But it was like running from frying pan to the fire.

In 2011 a professor of rheumatology at Nottingham University UK, Michael Doherty, a published a study looking at almost 900 patients aged 40 and older who took paracetamol, ibuprofen or a combination of both for chronic knee pain. When he compared the participants after 13 weeks, it came as no surprise that one in five on ibuprofen lost the equivalent of a unit of blood through internal bleeding. Surprisingly, he also discovered that the same proportion of those taking paracetamol had same problem.

Scientists at the Edinburgh University found in a recent study that constant use of paracetamol leads to toxicity of the liver. The report released by Dr Leonard Nelson and Dr Pierre Bagnanachi showed that paracetamol-linked liver failures are so severe that the patient almost certainly needs a transplant.

Last year, the FDA reduced the maximum dose of paracetamol (called acetaminophen in the US) in tablets or capsules to 325mg to reduce the risk of accidental overdoses.

The advice therefore is, take less of paracetamol and be mindful of how the meat you eat is prepared.