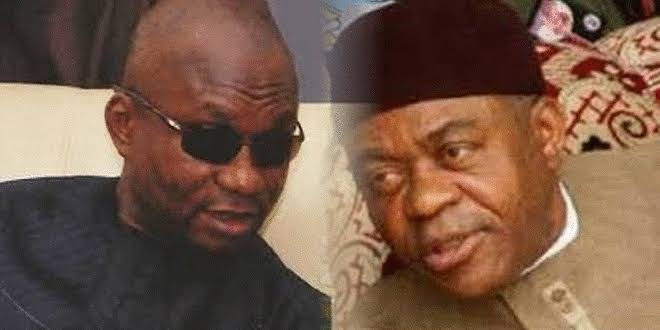 The Economic and Financial Crimes Commission has revealed how Theodore Orji, a former governor of Abia State, withdrew N500m from the state’s account for eight years.

EFCC has been looking into various financial malfeasance of Orji following a petition by an anti-graft group, Fight Corruption: Save Nigeria Group.

It was alleged that the various withdrawals were diverted to personal use.

The amount, the investigation revealed, was aside from the security funds expended on the Nigerian Police, Nigerian Army, Department of State Services, Navy etc, purchase of security equipment and vehicles for agencies.

The investigation, according to sources, was extended to his family members to ascertain their link and culpability.

Theodore Orji’s first son, Chinendum, who is currently Speaker of the Abia State House of Assembly and his brother are now frequent guests at the EFCC headquarters where they are explaining what they know about the fraudulent withdrawals.

The agency has traced 100 slush accounts to Chinedum.

Over 145 accounts used to coordinate the transfer of N150bn have been linked to Orji’s family.

Some of the funds illegally transferred by the family alleged in the petition include: N383bn revenue from federal accounts; N55bn Excess Crude Revenue; N2.3bn Sure-P; N1.8bn Ecological funds; N10.5bn loan from First Bank of Nigeria through the Ministry of Chieftaincy and Local Government Affairs.

“Exact Construction Limited, traced to Chinedum, is believed to have no record of any construction work in the country; also received humongous deposits in Keystone Bank where account was opened.

Acting spokesperson for the EFCC, Tony Orilade, also confirmed that the anti-graft agency was conducting an investigation on financial crimes involving Theodore Orji.