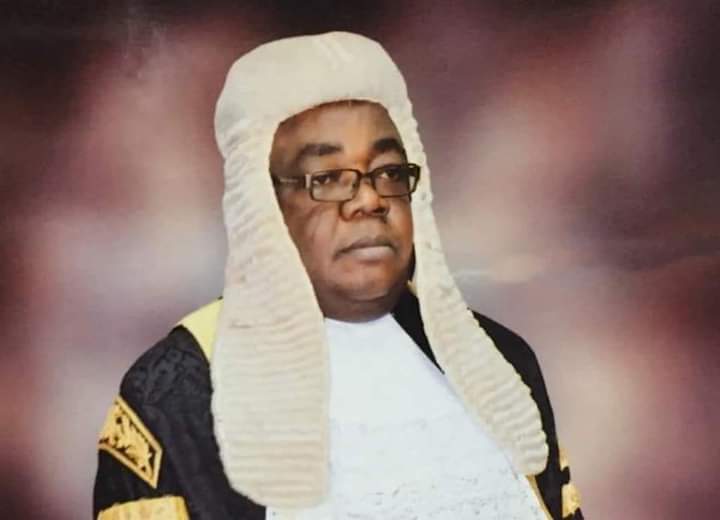 A coalition of US rights groups (US for Global Democracy, ABA Groups, Amnesty International, Global Peace Foundation, American Association for Justice), has nominated Justice Nweze for Judicial Award in the United States for exhibiting an extraordinary character, standing out, and demonstrating an uncommon feat with his minority judgment at the Abuja Supreme Court on the 3rd of March, 2020.

The nomination and award according to Reuters, is presented annually to persons who exhibits exceptional qualities of civility, courtesy and professionalism in their legal or judicial careers towards, not only colleagues and litigants, but the public at large. The award may also be presented to a person or organization who promotes civility and professionalism in the legal profession, this Justice Nweze has qualified.

It will be recalled that Justice Nweze in his dissenting judgment, asked the court to set aside the January 14 judgment that removed Ihedioha from office, describing it as a nullity and in bad faith.

He also nullified the declaration of Hope Uzodinma of the All Progressives Congress (APC) as governor on account of “wrong declaration” and held that Uzodinma misled the court into unjust conclusion with the unverified votes in 388 polling units.

In his declarative judgment, he said, “This decision of the Supreme Court will continue to hunt our electoral jurisprudence for a long time to come.

“In my intimate reading of the January 14 judgment, the substance of Ihedioha’s matter was lost to time frame. This court once set aside its own earlier judgment and therefore cannot use time frame to extinguish the right of any person.

“This court has powers to overrule it and can revisit any decision not in accordance with justice. This court has a duty of redeeming its image. I am of the view that this application should succeed. I hereby make an order setting aside the decision of this court made on January 14 and that the certificate of return issued to the appellant is returned to INEC. I also make an order restoring the respondents as winner of the March 9 governorship election.”

In another development the United States Congressman, Rep. Chris Smith, a ranking member of the House Foreign Affairs Committee’s Subcommittee on Africa and Co-Chair of the Tom Lantos Human Rights Commission, says “the world was disappointed by Nigerian Supreme Court when it did not reconsider its previous controversial ruling with respect to the gubernatorial election in Imo State that sacked Emeka Ihedioha as governor.

Mr. Smith, representing the city of New Jersey in the US House of Representatives, said the judgment released on Tuesday, 3rd March, 2020 is in contrast to justice. Nobody will take Nigeria judiciary serious again. The judgment is full of flaws an embodiment of shame, very surprising, embarrassing to the entire Supreme Court world. The judgment was without emphasis on their jurisdiction. Its shows high level of recklessness, carelessness and nonchalant attitude towards a true justice system.

He expressed concern over the Nigerian Supreme Court and the danger of eroding constitutional safeguards with what the apex court has done and for not doing the right thing in the review of Imo.

A Supreme Court panel of seven justices had in that judgement sacked Mr. Ihedioha of the Peoples Democratic Party (PDP) as governor and replaced him with Hope Uzodinma of the All Progressives Congress (APC), who finished poorly in fourth position, and whose party did not win one seat in the State House of Assembly.

That grotesque decision which sparked out protests across the nation and globally has made the apex court to come under immense fire, with majority of Nigerians, senior lawyers and civil societies condemning the decision seen by many as absurd.

But Congressman frawned at erosion of the independence of the judiciary in Nigeria. He said, “Nearly a year ago both the U.S. Embassy in Nigeria and I sounded the warning that President Muhammadu Buhari’s suspension and removal of the then-Chief Justice and elevation of a handpicked successor threatened judicial independence and also undermined confidence that electoral disputes would not be adjudicated fairly and now this is the outcome.”

Mr. Smith, however, added that, “The supreme court did not rule with integrity, pointing out that it has failed in its constitutional role as a firewall against unbridled federal executive power, and helping to preserve constitutionalism and democracy in Nigeria that is the order now”, I fear for Nigeria democracy, he asserted.