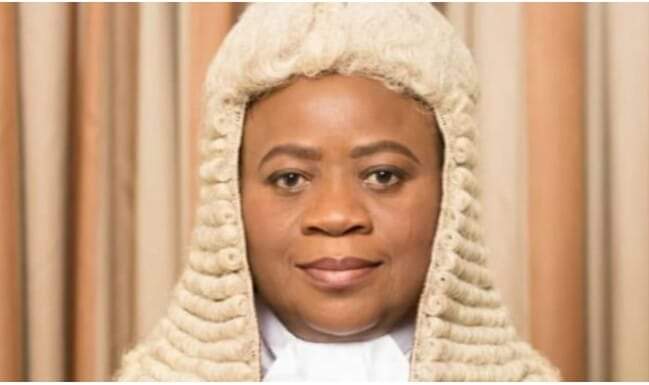 President Muhammadu Buhari thursday in Abuja approved the appointment of Justice Monica Dongban-Mensem as the acting President of the Court of Appeal.

Dongban-Mensem who hails from Plateau State, will act for an initial period of three months, with effect from today, March 6, 2020.

Dongban-Mensem will take over from Justice Zainab Bulkachuwa, who will formally quit the bench today, after attaining the mandatory retirement age of 70.

The appointment of Dongban-Mensem, according to a statement by presidential spokesman, Malam Garba Shehu, was based on the recommendation of the Chief Justice of Nigeria, Justice Tanko Muhammad, to the president in compliance with the provisions of Section 238(4) and (5) of the 1999 Constitution as amended.

Dongban-Mensem, who is the next most senior judge of the Court of Appeal, the statement added, will act in that capacity until a substantive appointment into the position is made by Buhari subject to Senate confirmation.

Dongban-Mensem, a daughter of a retired Court of Appeal judge, Justice M. B. Douglas-Mensem, hails from the Shendam Local Government Area of Plateau State. Until her appointment yesterday, she was the Presiding Justice of the Court of Appeal, Enugu Division, and a life member of the Body of Benchers. The Body of Benchers is responsible for the training and discipline of all lawyers in Nigeria.

The judge, who was the Registrar of Plateau State High Court in 1979, became a magistrate of various grades until she rose to the position of chief magistrate between 1981 and 1990.

She was a visiting lecturer on Press Law at the Catholic Media Centre, Kaduna from 1988-1992 and part-time lecturer at the University of Jos between 1989 and 1997.

She served as Deputy Chief Registrar, Superior Courts and Protocol Affairs from 1990-1993 and was appointed the Judge of the High Court of Justice, Plateau Judiciary from 1993-1996.

Dongban-Mensem was redeployed from Plateau State to Abuja in 1997 and became a judge of the Federal Capital Territory (FCT) until 2003. She was appointed the acting Presiding Justice of the Lagos Division of the Court of Appeal between November and December 2009.

Meanwhile, the Nigerian Bar Association (NBA), yesterday lamented the low number of female justices on the bench of the Court of Appeal, noting that the figure reflects the poor gender diversity of the country.

National President of the NBA, Mr. Paul Usoro (SAN), who traced the first appointment of a female to the bench of the appellate court to 1987, following the elevation of Justice Aloma Mukhtar, disclosed that out of the 86 justices of the Court of Appeal only 23 are female.

Usoro, who spoke at the special valedictory session held in honour of the Court of Appeal President, Justice Zainab Bulkachuwa, however, called for more inclusion of more female justices into the bench of the appellate court.

“Prior to the elevation of Mukhtar JCA (as she then was), our appellate courts, notably, the Court of Appeal and the Supreme Court were all male dominated, and this, in a society where it is believed has a higher population of females, in real terms”, he said.

“As at date, out of the 86 Justices of the Court of Appeal, only 23, barely 30 per cent are female. With such a poor record in gender diversity, the epoch-making achievement of Bulkachuwa truly calls for celebration and corrective steps in enlarging the coast of our diversity and gender inclusion.”

Usoro while congratulating Justice Bulkachuwa for a successful service at the nation’s judiciary wished her peace and good health on retirement, stating that she is only retiring into the country’s reserve bench and may be called to national duty in the continuing task of nation building.

Justice Bulkachuwa bows out of office March 6, 2020 on attainment of the mandatory 70 years for retirement.