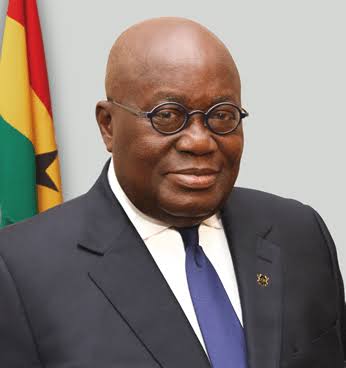 The Ghanaian Government has described as fake, the news of her president Nana Akufo-Addo been infected with the novel deadly Coronavirus.

Ghanaian journalist, Kevin Taylor had said that president Akufo-Addo, together with his senior Minster Yaw Osafo Marfo , have contracted the deadly disease but has kept quiet over it to calm down nerves and set the Ghanaian mind on how the combat the pandemic.

He stated in one of his radio shows that the President has tested positive for coronavirus has become quiet over the issue not to throw the country into a state of panic and fear. The deadly disease has made many countries to place a ban on the their public officials and also close their borders to avoid foreigners from bringing coronavirus which can kill a person within 14 days if no medication is taken.

He indicated that the president and the Senior Minister got infected with disease at the recent 69 birthday party for the first lady, Rebecca Akufo held at Peduase Lodge. According to Kevin Taylor, a source at the Jubilee House disclosed to him but it has not yet been confirmed as the president has kept mute on the matter.

“They got these traces from when they had a party at the Peduasi lodge. As we speak, both the President and Senior Minister have been quarantined,” he said.

Speaking at a press conference on Wednesday, Kojo Oppong Nkrumah, cautioned the public to desist from the practice of spreading fake news.

“There are those who even in these trying times take delight in fabricating stories and throwing them out there on social media sometimes for political purposes and sometimes for mere humour. We would want to discourage that as much as possible. There are stories going around that the President and some ministers have tested positive [for Coronavirus]. You have seen it on social media. It is not true,” he said.

The president noted in his address to the nation that all public gatherings such as funerals, weddings church services etc. have been suspended for four weeks and also all schools ranging from basic schools to tertiary institutions have been shut down until further notice.

This is what the president said:

The deadly disease which was discovered some few months ago is spreading into different parts of the world causing fear and panic among men and women. Symptoms of the deadly virus begins with throat being infected making the patient have sore throat for about 4 day. The virus then blends into a nasal fluid that enters the trachea and then the lungs, causing pneumonia for about five days. After the patient pneumonia comes high fever and difficulty in breathing leading to death if no medication is taking. But for now there is no prescribed medication for Coronavirus.

However, it is being speculated that one of the cures for coronavirus is by taking in alcoholic drinks which makes the body produce heat and this can kill the virus because the virus needs a cool place to thrive. Also, the sun is another best cure for those who have contracted the disease because the virus hates heat.