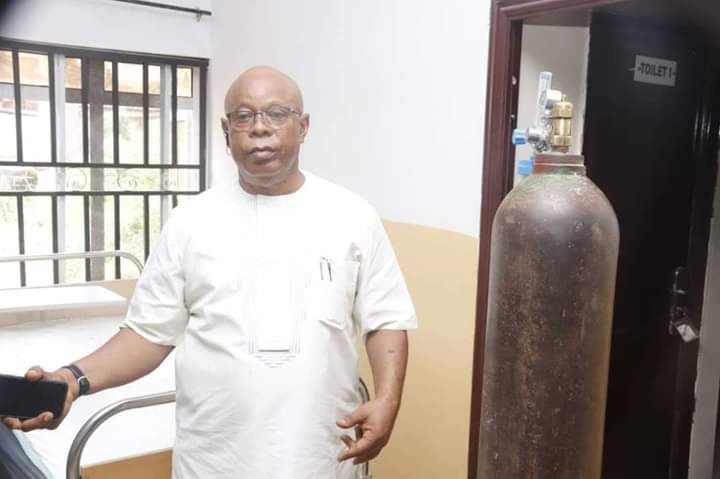 Spurred by individual donations to Abia State, the state government has come out to say that, it is 100 percent above many states of the federation in its readiness to confront the dreaded Corona virus pandemic, anytime the virus is reported in the state.

The commissioner for Health Dr. Joe Oduji made this known while conducting journalists round the isolation centres located within Amachara Specialist Hospital, Umuahia, one of the three designated in the State. The Commissioner further gave some details of the features to include two doctor’s room, nurses room, laboratory designated to host the testing kits and run other tests, X-ray room, duffing room, five-bedded isolation wards, each for males and females with conveniences, TV sets, respirators, oxygen canisters, store room containing 7,000 Personal Protective Equipment (PPE), treatment room, consulting room among others.

The Commissioner said apart from the two five-bedded wards, there is provision for one 100-bedded extension in case of patients overflow with additional 2,500 PPEs at the location. He explained that Abia State Government made attempts
to procure Testing Kits but was advised by the National Centre for Desease Control (NCDC) to shelve the idea as according to them most of the Testing Kits in circulation today are fake.

The commissioner therefore appealed to the federal government to provide Testing Kits to Abia State and other States of the federation, stressing that ready availability of Testing Kits remain key to quelling rumors on cases of the virus. He also called on the people not to panic but adhere to the medical guidelines given to them on how to prevent the infection.

Contributing, the State Commissioner for Information, Chief John Okiyi Kalu, disclosed that Personal Protective Equipment (PPE) produced in Aba have been delivered to the State Government and would be handed-over to the Commissioner for Health today to ascertain their fitness for use. He disclosed that Abia workers and verified pensioners would receive their March payments from tomorrow to enable them stock food and get ready for a possible sit-at-home directive should the situation get to that point. He further informed that the government is ready to continue to pay all workers including those who have been advised to stay at home within this period and called on private sector organizations not to slash wages of workers they decide to keep at home at this time.

Continuing, Okiyi said that the State is still very hopeful she would not get the infection, adding that the Governor, Dr. Okezie Ikpeazu, was ready to deploy all available resources in the state and beyond to protect the lives of the citizens and residents of the State. He called on those he described as seasonal politicians not to politicize the current situation the world is facing but rather sincerely contribute their bits to help solve the COVID-19 challenge.

While reiterating that Abia State has no record of COVID-19 so far, the Information Cmmissioner who stated that COVID-19 knows no political party, called on stakeholders who wish to assist the State in any way to approach the Commissioner for Health.

In her remarks, the state Epidemiologist, Lady Peace Nwaogwugwu, who described the case definition for those to be tested for the virus explained that at the moment the state has enough sample bags to dispatch samples to Edo state for analysis and assured Abians that with the measures put in place by the state government, the state is more than prepared to handle any eventuality arising from the COVID-19 pandemic