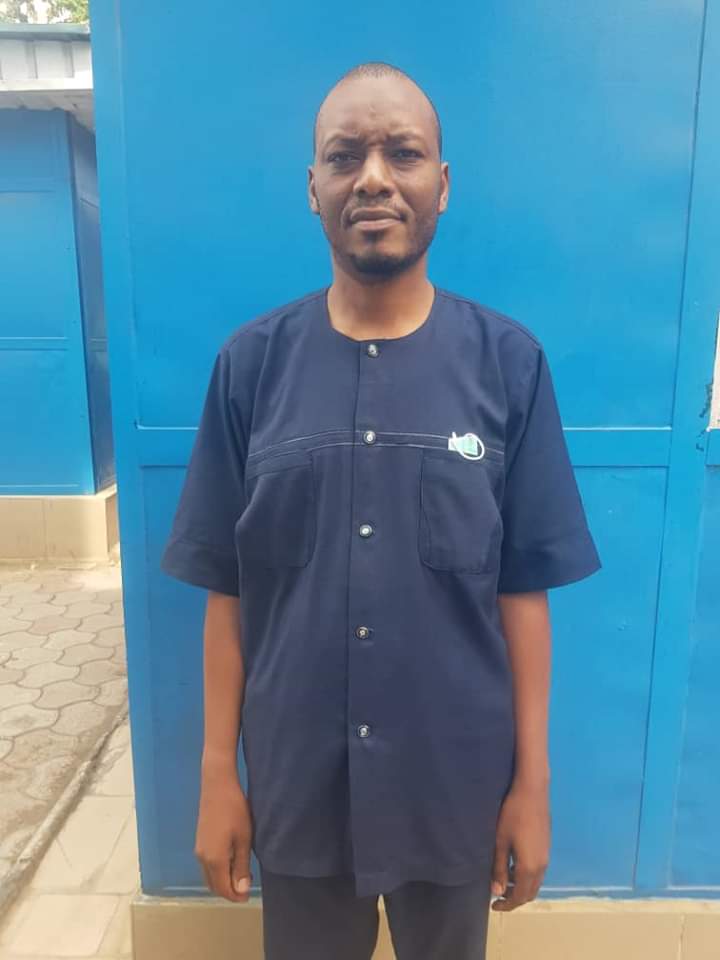 A 42 year old male resident of Spring Valley Estate of the Federal Capital Territory Abuja, Pharmacist Abubarkar Mustapha Danraka (pictured) has been arrested by Operatives of the National Agency for The Prohibition of Trafficking In Persons (NAPTIP) for alleged sodomy. Dankara, who has a PhD, was arrested after he had an anal sexual intercourse with a 12 year old boy (name withheld). This offence is contrary to the Violence Against Persons (Prohibition) Act 2015
Mr. Abubakar Danraka who works at the National Hospital, Abuja as Chief Pharmacist is currently the Special Assistant (Technical) to the Director General of the National Institute for Pharmaceutical Research and Development (NIPRD), Abuja.
Apart from being a Pharmacist, Mr. Abubakar who hails from Zaria, Kaduna State is also an Imam in the Mosque within his estate.
Narrating his ordeal, the 12 year old victim told Operatives of NAPTIP that the crime took place on Saturday 21st March, 2020 at the residence of the Suspect. According to him, after their religious educational programme (Islamiyya) that afternoon, he decided to check on his friend who happens to be a neighbor to the suspect.
On getting there, after several knocks at the door, there was no response but as he made to leave, the suspect opened his door and beckoned on him. He subsequently grabbed his hand and took him into his sitting room. The suspect went further to offer him a glass of water to drink. Not suspecting any foul play, the boy drank the water and began to feel weak. In that state of weakness the suspect overpowered him laid him on a red settee in his sitting room and forced his penis into his (victim)anus.
After the suspect was done, he asked him to go home with a stern warning not to mention what had happened to anyone.
On getting home, his mother scolded him about his whereabouts but noticed her son was uneasy. She took him into the room questioned him and he opened up about what had happened to him.
The victim said, his mother checked his body and saw sperm content and bruises around his anus region. She and the father rushed him to the National hospital, Abuja where he was admitted. The victim was discharged on Thursday 26th of March, 2020 after spending five days in the hospital.
The suspect who is currently in NAPTIP’s custody has denied that no such event occurred. However, an identification parade was done where a number of men with the height and stature of the suspect were put together, and the victim pointed out the suspect. Subsequent investigation at the home of the suspect also corroborated the narration of the victim especially with the colours of the furniture in the suspects’ sitting room as well as the setting of the place. Further investigations are ongoing.
While reacting to the incident, the Director-General of NAPTIP, Dame Julie Okah-Donli expressed sadness and wondered why such a person should get involved into such a crime. She however, appealed to parents to always be vigilant on issues of their children.