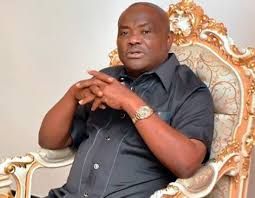 The Rivers State governor Nyesom Wike has maintained his stand in prosecuting the pilots that flew into Rivers State in violation of the lockdown Order in his state.

“You can fly, I can not stop you from doing so but when you land, do not enter my territory. The roads were constructed by Rivers State Government.”

“You don’t talk law on Pages of Newspaper, you talk law in the Court and we’re prepared. A Certain minister sat somewhere issuing order to me, let him come and release the people in our custody that violated the law.”

“I am not one of those Governors who fly to Abuja every now and then to look for favours. COVID-19 has come, let everyone stay in his state and spend money.”

“Nigerians shake when they hear oil companies, they shake because they have compromised. Imagine an appointed Minister issuing an order to an elected Governor. They wanted to rig us out and lost. Recall that the Former DG of DSS ordered his men to leave the INEC Collation Centre for the invasion of the Centre. They lost.”

“The right must be done. We are talking about something that is killing people. They want coronavirus to escalate in Rivers State. The law must be tested. Make sacrifice and let us contain the virus.”

“Nobody will use Rivers State as a toy. This Federal Government does not like us, but a government will come that likes Rivers State.”

“People selling Akara are being charged to Court in Lagos. But they want us to allow oil companies to flout the law.”

“Any Company operating in Rivers State that does not assist the State in the fight against COVID-19 will hear from Rivers State. I don’t go to them to beg for anything, I have not collected anything from them and so, I can stand firm and make a decision.”

“We are not those State where a Governor receives 28million naira and snap pictures with it. In Rivers State, we don’t collect Widow’s Mite. You make money here, it is our entitlement. Look for the COVID-19 task force account and make your donations there. There are poor people who still have Pride and Integrity.”

“The only opposition party in Rivers State is SDP who won a seat in the House of Assembly. How can someone from a party who cannot produce a single Candidate just within the party to stand for an election come out to talk about how to run a State? Go and put your house in order.”

“All those politicians politicising Covid-19 saying that they were tested positive and now negative, they should also make public their HIV status.”

“If you don’t like me, should I kill myself? That will even make me to like myself the more.”

“To Pressmen —Most of you don’t like us, you eat our food but we know the interest you represent. Write your reports well, if you don’t write well, Corona Virus will catch you.”