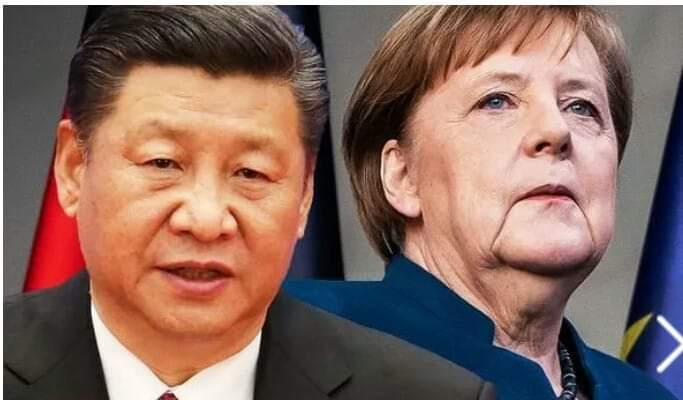 Germany has sparked outrage in China after a major newspaper put together a £130bn invoice that Beijing “owes” Berlin following the impact of the coronavirus pandemic.

Germany has followed France, the UK and the US in directing its coronavirus anger at China, where the virus originated. Recent attacks come amid findings that Beijing appeared to cover up the true scale of the crisis, as the source of the outbreak remains a mystery.

On Saturday, Donald Trump warned that China should face consequences if it was “knowingly responsible” for unleashing the coronavirus pandemic.

President Trump told reporters: “It could have been stopped in China before it started and it wasn’t, and the whole world is suffering because of it.

“If it was a mistake, a mistake is a mistake. But if they were knowingly responsible, then there should be consequences.

He said the Chinese were “embarrassed” and the question was whether what happened with the coronavirus was “a mistake that got out of control, or was it done deliberately?”

GERMANY
Germany has sparked outrage in China after a major newspaper put together a £130bn invoice.
CHINA
Trump warned that China should face consequences if it was “knowingly responsible” for unleashing the coronavirus pandemic.
President Trump and his senior aides have repeatedly accused China of lacking transparency.

This week the city of Wuhan, where the outbreak started, revised its number of fatalities by with a sudden 50% jump in the figure.

The UK has joined US intelligence officials in investigating claims that the virus originated in a Wuhan virus lab and not a wet market.

A bombshell op-ed this week in Germany’s largest tabloid newspaper, Bild, joined this outrage by drawing up an itemised invoice for €149bn (£130b).

The list includes a €27 billion charge for lost tourism revenue, up to €7.2 billion for the German film industry, a million euros an hour for German airline Lufthansa and €50 billion for German small businesses.

China responded by claiming the invoice “stirs up xenophobia and nationalism”.

Bild Editor-in-Chief Julian Reichelt rebutted the criticism, saying: “We asked in our newspaper Bild whether China should pay for the massive economic damage the coronavirus is inflicting worldwide.

“Xi Jinping, your government and your scientists had to know long ago that coronavirus is highly infectious, but you left the world in the dark about it.”

“Your top experts didn’t respond when Western researchers asked to know what was going on in Wuhan.

“You were too proud and too nationalistic to tell the truth, which you felt was a national disgrace.”

Meanwhile, a safety rights group in Nigeria, Media Centre for Safety Reporting (MCSR) has called on relevant agencies to put their losses together for compensation from Chinese government, if China is found culpable by deliberate act of negligence and cover up on Wuhan Coronavirus pandemic ravaging the entire world.

The group’s president, Mr. John Thompson said, they have since commenced work to achieve their task. He said some civil rights organisations have also indicated interest to collaborate with MCSR to realize the set objective.