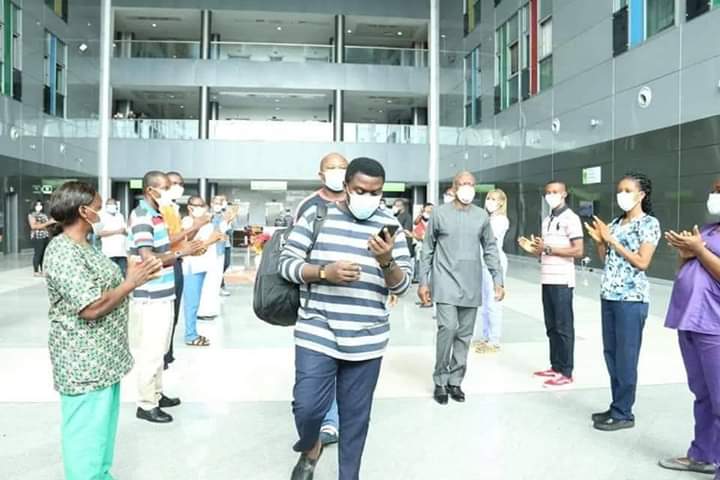 It was fanfare and excitement in Uyo the Akwa Ibom State Capital, as three more COVID-19 patients were discharged from the isolation facilities after their status had been confirmed negative by the Nigerian Center of Disease Control, NCDC.

Two of the three discharged persons Ememobong Gabriel Udofa a pharmacist and Dr. Otobong Asuquo walked out of the Ibom Specialist Clinic to the joy of all present, in company of the State Commissioner for Health Dr. Dominic Ukpong, the State Epidemiologist Dr. Ntiense Umoette and a Respiratory Surgeon Prof Etette Peters.

Speaking to reporters, Ememobong Udoakpan said at first he was scared but that he got inspired to brace up, from the State COVID 19 medical team as well as from victims who recovered from the attack and were shown on the social media.

“The treatment here has been topnotch. There is a difference between how I came in here and how I am today. I was well taken care of and I commend Governor Udom Emmanuel for his proactive stance against the spread of the Covid-19 pandemic and the medical team led by the Commissioner for Health, for the facilities put in place here. It helped in my speedy recovery.”

Mr. Udofa one of the first five index cases in the state, said his symptoms started a week after the foreign based medical mission departed the state on March 13, when he started developing symptoms like headache, before losing his sense of taste and smell.

“It was on the 23rd of March that it dawn on me that I had symptoms of the COVID 19, my brother who is an ENT Surgeon told me it was COVID 19, I boiled chicken and I could not perceived its aroma and could sense any taste, and that was when I suspected that I may have contacted the disease.”

Also speaking, Dr. Asuquo said he knew the symptoms of the virus and had to isolate himself for 10 days while reaching out to the state medical team to come to his aid.

He said he was happy to be discharged and assured that he was going to remain resolute in carrying out his responsibility of saving lives as a medical doctor.

He urged members of the public against ignoring the warnings on the dangers of the virus, as it was very contagious and dangerous.
Confirming the discharge of the three persons, the State Commissioner for Health Dr Dominic Ukpong said that the state was not going to relent in ensuring that COVID 19 is minimized and contained.

He said that work on the Grade Four laboratories to help in the testing of the Coronavirus is at advanced stage, maintaining that one would be sited in Uyo and the other one at the nearly completed Isolation Facility in Ituk Mbang, Uruan.

The discharge has brought to six, the total number of COVID 19 patients, discharged from the state isolation facility. It will be recalled that the NCDC recently scored the state 99 percent in contact- tracing, a critical element in the fight against the spread of the pandemic.