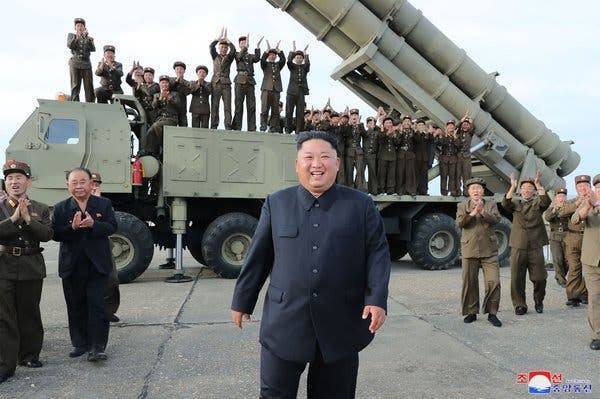 NORTH KOREA is stepping up inspections of its artillery as it assesses its readiness for conflict, the South Korean defence minister has warned as conflicting reports emerged about Kim Jong-un’s health.

Kim Jong-un’s kingdom has shown an “unusual increase” in such activity recently, including air force flight operations. Jeong Kyeong-doo told of how South Korean officials had detected their neighbours’ change in behaviour amid the coronavirus pandemic. The defence chief said on Friday: “”North Korea … has been heightening military tensions through an unusual increase in the inspection activities for its combat readiness posture, mostly of its artillery, and in its air force planes’ flight operations.”

His warning comes as reports in Asia claimed Kim Jong-un may have died.

He said Kim Jong-un and his close circle have instead been concentrating on their arsenal of weapons.

Last week the military fired what appeared to be surface-to-ship cruise missiles off its east coast.

And on the same day Sukhoi-variant fighter jets and MiG-type planes were flown in the airspace above the city of Wonsan.

The fired several air-to-ground missiles into the East Sea.