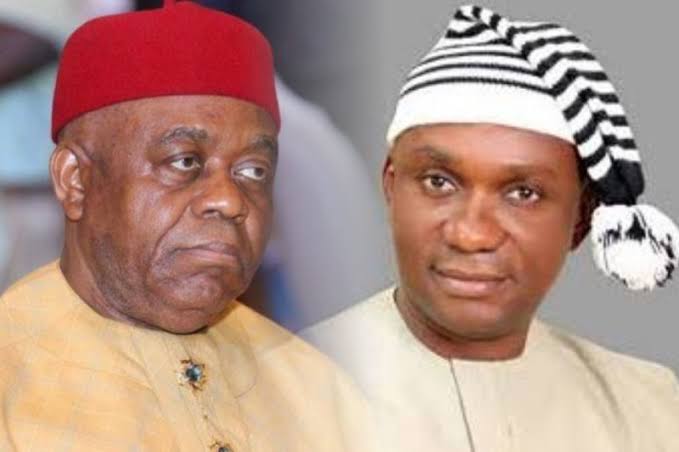 All payments made in cash
Gave N5.760b to Abia lawmakers,
N7.2b to informants
Made payments to traditional rulers, others

A former Governor of Abia State, Senator Theodore Orji has furnished the Economic and Financial Crimes Commission (EFCC) with details of how he spent his N38.8billion security votes during his eight years in office.

Orji who was in charge of the state between 2007 and 2015 is being investigated by the anti-graft commission for corruption.

He said he collected N38.8billion as security votes during the period and not N48billion as alleged by the EFCC.

Orji who is currently representing Abia Central Senatorial District in the National Assembly said he shared much of the N38billion with members of the state House of Assembly, his security informants and traditional rulers.

He claimed to have also given part of the money to military units,the police,the Nigeria Security and Civil Defence Corps (NSCDC) and security agencies as what he called statutory allocations.

In a tell-it-all statement to his interrogators, the former governor said he gave successive members of the State House of Assembly N5. 760billion, at N60million per month, in the eight years.

He also claimed to have paid N75million monthly to security informants in 15 of the 17 local government areas of the state within the same period.

The yet-to-be identified informants allegedly pocketed a total of N7.200billion between 2007 and 2015.

Some of the security agencies, according to him, received N2million per month.

However, he told the interrogators that he does not have a comprehensive list of all the beneficiaries of the largesse because the Government House staff who used to disburse the cash is no more.

He gave the man’s name simply as Felix.

Orji said he did not ask for the list from Felix at the expiration of his tenure as governor.

He only issued directives to Felix on how to share the security votes.

He also said he never collected cash either from the Director of Finance or the Cashier in Government House.

The EFCC insists that Orji collected N48billion in eight years.

It has retrieved five huge bags of documents from the relevant desks in Abia State on the ex-governor’s financial transactions.

Based on Orji’s confessions, the EFCC is expected to arraign him in court soon being in what a source described as “a straightforward case.”

The Nation gathered that the former governor made the revelations during a session on oath in the presence of his lawyer, who he referred to as Edmund.

It was the first time Orji would open up after many years of trying to make him respond to allegations against him.

He said that from his assumption of office up to his exit the funds were distributed in cash. “There were also statutory funds to the security agencies,” he was quoted as saying.

He said the first Speaker in 2007 and the last Speaker in his second term confirmed the receipt of N60million monthly from his security votes.

He said the Majority Leader also attested to the receipt of the monthly cash although he claimed he did not know “ how they shared the money.”

He could not explain what the monthly cash to the lawmakers was meant for or remember the exact amount he was giving the traditional rulers monthly.

Orji admitted that all disbursements by the late Felix were based on his directives.

Usually, according to him, the funds were brought by the Director of Finance (DF)in batches.

The DF would then inform the ex-governor on how much had come and would then be kept in the accounts.

Orji would, in turn, issue directive to the late Felix on what to disburse and to whom.

He was quoted as saying “Felix comes to show me how disbursement is made. After disbursement, Felix keeps the list for safety. As I was leaving the Government House, I didn’t ask him for the list.”

He claimed that he never personally collected any cash from the votes whether from the Director of Finance or Government House cashier.

The funds were channelled through Felix “on my directives,” he said.

The EFCC is still working on the charges against Orji.
Read Also: ‘Orji Uzor deserves apology from EFCC not retrial’

But a reliable source told The Nation that investigation had “reached an appreciable stage for trial.”

Continuing, the source said: “We have been on this case since March 2017. Our operatives were painstaking in cracking this case.

“We will arraign ex-governor in court any time from now because the charges are ready. The only challenge is COVID-19 but we won’t allow it to affect the arraignment.

“In the face of the law, he is presumed innocent until proven guilty by the court. The onus is on him to prove beyond reasonable doubt that he did not commit the financial recklessness.”

The source said the use of security votes was the first leg of the ongoing probe of Senator Theodore Orji.

The former governor has been under investigation since November 22, 2018 following a petition from a group, Fight Corruption: Save Nigeria Group

In the March 17, 2017 petition, the group alleged that Orji received and diverted various sums of monies that accrued to Abia State while in office.

The breakdown of the amounts allegedly received by him are as follows:

N10.5 billion loan from First Bank of Nigeria through the Ministry of Chieftaincy and Local Government Affairs.