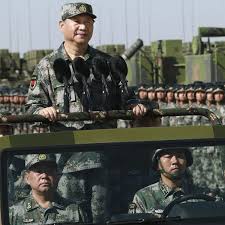 By the year 2050, according to the metrics of continental geopolitical ethnography, Western Europe will become a Muslim enclave and Africa will become a Chinese continent. While European leaders are taking steps to reverse this trend, African leaders, instead of setting up a “sinking fund” are just happy to revel in their own batty.

Fact 1: Compared to Africa, communist China is a little country, indeed Africa is about five times the size of China. However, the population of China is roughly two billion, same as the population of Africa. Fact 2: In terms of mineral resources, Africa is the world’s richest continent, and it is a hundred times richer than China. Fact 3: China wants Africa’s land and resources by hook or crook means to ensure the survival of the Chinese race.

The Chinese communist party’s policy for Africa is a POPULATION SWAP solution that will ensure the survival of the Chinese race. As laid out in an obnoxious instrument, China intends to send half a billion people into Africa before the end of year 2040 and these families will be encouraged to bear four to five children so that by year 2050 there will be over 2 billion Chinese in Africa. During that same period, African population is strangely projected to decrease by some unknown occurrences. End game, the Chinese population in Africa will surpass the African population by 2050. China will effectively own the African continent and its resources. End of story.

As at end of year 2019, over 50 million Chinese citizen have already being pushed onto the African continent, most of them hardened criminals taken out of jails. There are about 2.5 million in South Africa, about 2 million in Nigeria, over a million each in Ghana and Ivory Coast etc. There are pockets of them everywhere in 54 African countries. I understand that South Africa has now cancelled all Chinese visas.

In readiness for the takeover, the Chinese are snapping up African seaports and airports. Their “modus operandi”, is to grant African countries some toxic loans to build their much needed infrastructure and get African leaders to sign a shrouded contract, written in Mandarin, that will permanently transfer the ownership of these ports to the Chinese nation. Kudos to the eagle eyed President John Magufuli of Tanzania who tore up a contract signed by his predecessor and told the Chinese to go home.

In Djibouti, the Chinese deceptively took that small country’s seaport off them and set it up as a military base. There is a military buildup going on there now as the US have also setup a base there to keep the communists in check.

China is pushing hard to get their citizens into the police force of all African countries. Zambia recently commissioned two Chinese nationals into their police force but had to take the uniforms off them after public outrage. There are Mandarin speaking Chinese police officers roaming the streets in South Africa, they even have their own police stations, and can arrest, detain and interrogate offenders in SA, including South Africans.

In all African countries this is standard Chinese policy, in fact, most Chinese companies in Africa have fully armed Chinese security guards who from time to time turn their weapons on Africans. There was a recent incidence in SA where a Chinese employer locked up his workers under the guard of Chinese security and forced them to work for one week against their will.

In Mozambique, the Chinese built a whole city of about 400,000 houses, Mozambicans are not allowed in there, only the Chinese. There are similar Chinese cities like this in other African countries.

In Nigeria, the Chinese are hiding in mineral rich rural areas and are heavily involved in illegal mining, 17 of them were recently arrested in Osun while another two were arrested in Zamfara. There are many more hiding in the rural communities where they are protected by powerful tin gods. In Lagos state, Mandarin, the Chinese language has being introduced into the secondary school curriculum.

China has over the years put itself forward as a geriatric Santa Klaus, who wants to help Africa grow, but after we saw the way Africans were molested in China during the Covid19 debacle, we now understand their true intensions. They want our resources but they don’t want us. Africans were dragged out of their hotels, denied access to hospitals, eateries and were not even allowed into supermarkets. Some were chased down the streets and beaten blue black by the communist police. There was an art gallery where we saw the Chinese comparing us to monkeys, and that gallery has not yet being pulled down.

For all Africans, its time to take action, to stop the Chinese influx into Africa, to stop the illegal mining of our mineral resources, to stop the ongoing dehumanisation of Africans on our own soils, we need to pay attention, if we don’t want to pay the price. China is not a friend of Africa, and we do not need China. China has only one diabolical intention, they want to take what is ours, they want to lay claim to our inheritance