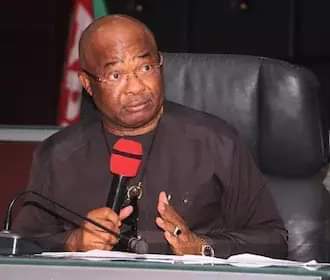 Imo state governor, Senator Hope Uzodinma on Wednesday, May 20, signed an Executive Order No. 002, 2020 significantly reducing Right of Way (ROW) of telecommunication companies in the state from N4500 to N145 per meter in tandem with recent federal government policy.

The order explained that the reduction was a manifestation of the state government’s determination to spur the telecommunication companies to further invest in broadband infrastructure and to trigger ancillary on-line services, especially in the field of education.

The order further said that the government was hopeful that the drastic reduction from N4500 of the broadband ROW to N145 per liner meter of fibre, will accelerate the deployment of affordable, and reliable modern high-speed connectivity in the state.

The Executive Order urged telecommunication companies to note that the state plays host to a vibrant youthful demography located in many tertiary institutions, who form the bulk of the end-users of their products.

Recall that Governor Uzodinma recently revealed that his government has saved about N800million within the first two months of his assumption of office.

The governor said the move is in a bid to stop continuous misappropriation and embezzlement of funds in the Imo State Oil Producing Areas Development Commission (ISOPADEC).

Governor Uzodinma disclosed this at the palace of the traditional ruler of Mmahu community in Ohaji Egbema while meeting with stakeholders in oil-rich Ohaji Egbema local government area of Imo state, assuring that he will ensure the funds are put to good use.

Meanwhile, the task force on the fight against COVID-19 in Imo on Monday, May 18, declared that the state is now coronavirus free.

Before now, the southeast state had seven active cases of the dreaded disease.

Briefing journalists in Owerri, chairman of the committee, Professor Maurice Iwu explained that three out of the cases recorded in the state were discharged on Sunday, May 17 following their satisfactory condition.