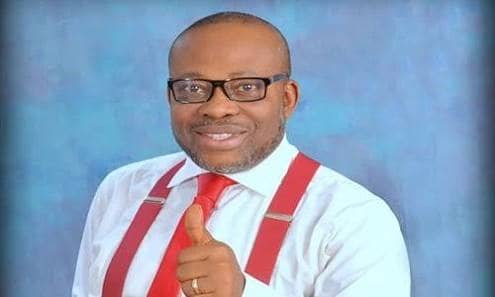 Mr Monday Ubani, the immediate 2nd Vice President of the Nigerian Bar Association has strongly condemned the continuous and illegal detention of Mr Emperor Ogbonna, a human right lawyer by the Department of State Security (DSS), after he was abducted from the Correctional Centre in Umuahia where was detained for over a month and half; for alleged infraction of the Cybercrime Act by the former Commissioner of Police of Abia State before been granted bail by the Federal High Court in Umuahia.

It will be recalled that Emperor Ogbonna Esq was alleged to have published on his Facebook wall that Governor Okezie Ikpeazu of Abia allegedly visited a shrine outside the country where he was said to have sworn to an oath of allegiance and secrecy to the former Governor of the State, Senator T.A Orji. This publication led to his arrest and prosecution before a magistrate court that has no jurisdiction

Despite the zeal of the State Government officials to perpetually keep him in the correctional centre having refused to charge him before the appropriate court with jurisdiction, the Defendant through his team of lawyers made up principally, of the members of the Aba Branch of the NBA stoutly fought and secured a liberal bail condition for the attorney.

It was reliably gathered that, before perfecting the bail conditions, the State Government and DSS officials in Umuahia stormed the Court premises in a commando-style seeking to abduct Mr Emperor Ogbonna similar to what took place recently in Sowore Omoyele’s matter at Federal High Court Premises, Abuja, but this time around, the Correctional Centre officials in Umuahia were awake and resisted them on the ground that the bail condition was not yet perfected.

Unfortunately later in the evening, acting under pressure from Abia state government, allegedly under the direct supervision of the Chief of State to the Governor Dr.A.C.B Agbazuere, the Correctional Centre officials released Mr Emperor Ogbonna to the DSS officials in Umuahia who had kept him in illegal detention till date.

Mr Ubani is of the opinion that this is clearly a flagrant and unmitigated violation of the fundamental human rights of Mr Emperor Ogbonna as donated by the supreme law of the land being the 1999 Constitution as Amended. The maximum period allowed by the constitution for the detention of a citizen is 48 hours and the reason for that long period is, if there is no court within certain radius for arraignment within 24 hours.

Mr Ubani contends strongly that the continuous detention of Mr Emperor Ogbonna Esq whether in Umuahia or Abuja for whatever offence whether against the present, past Governor of the State or against the present President of Nigeria is a bailable offence for which this long detention is condemned in strongest terms.

Mr Ubani states “that the DSS is permitted by the laws of the land to charge Mr Emperor Ogbonna to a court of competent jurisdiction for any offence he is alleged to have committed at any place in Nigeria. However, his continuous detention without any charge or arraignment is unlawful, unconstitutional and clearly satanic”.

He further reminds tormentors of Mr Emperor Ogbonna that they will never remain in government or service for ever and that whatever they sow today, they will reap in large quantity whether here on earth or life hereafter. “It is only a matter of time” he concluded.