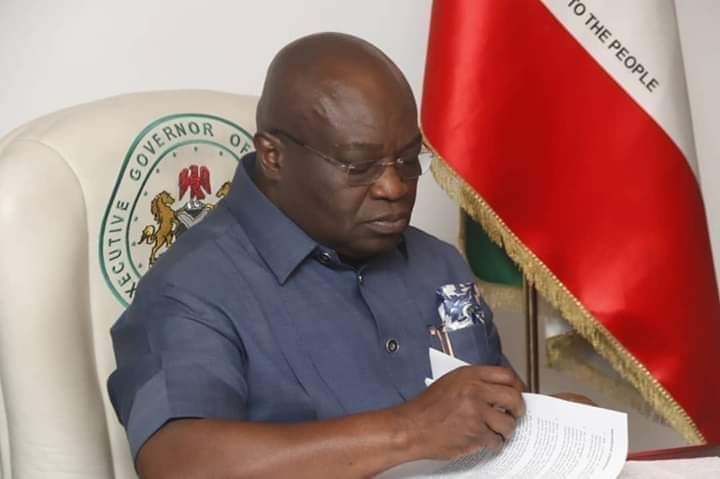 Governor Okezie Ikpeazu has described the sudden death of the Honorable Commissioner for Environment, Dr Solomon Ogunji as a deeply profound personal loss.

Describing the Late Commissioner as “my best friend”, an emotionally distraught Governor Ikpeazu said that his friendship with the Late Dr. Ogunji has remained since his 13th birthday and ever since then, no one else has come closer to him in terms of personal relationships.

“We grew up together, attended the same secondary school where we were classmates. I cannot remember any other person that shares with me the kind of relationship I had with Solo”, Ikpeazu continued.

“Many years ago, we both lost our fathers and incidentally, the two burials were fixed for the same day. While the funeral service for his father was still on and before the burial proper, he left his village at Ohambele Ndoki and joined me at Umuobiakwa. He got to my village while we were getting set for the funeral service of my late father. I asked him why and he told me that he had two elder brothers who could take charge at home while I was not just the first son but the first child, and so needed all the psychological support I could get. He stayed with me till the next day before returning to his village to join his own family. That is the kind of friend Solo was to me. It went beyond mere friendship”.

“As young boys”, the Governor continued, “we shared dreams of our tomorrow at a time when no one knew that we would find ourselves at the top echelon of public service. Solo’s death is definitely very hard for me to swallow”.

“Solo was a committed workaholic. He was prepared to go the extra mile to protect our mandate and whatever assignments he was given in our government, he handled with an uncommon commitment. You could never find him wanting. For him, it was beyond the ordinary call of duty, it was an obligation he owed me, his best friend. I trusted him completely”.

He described the Late Dr. Ogunji as strong, brave, courageous, well educated, committed, defiant and straight forward to a fault.

Recalling the role he played in securing the World Bank approval for the reconstruction of Ngwa Road, Port Harcourt Road, Uratta Road, Obohia and Ohanku Roads, Governor Ikpeazu stated that as an expert in Project Implementation and Management, late Dr. Ogunji was his first choice in managing that project on behalf of the State Government and he had started well by getting the contractor to agree to construct an alternative route linking Ngwa Road from No. 1 Port Harcourt Road to provide easy access to residents in that area while the main project proceeded.

“More than ever before”, The Governor emphasized, “I shall do everything humanly possible to ensure that the reconstruction works on those roads are pursued to their logical conclusions. This is a duty I owe Solo”.

In the words of Governor Ikpeazu, “with Solo’s death, things will never be the same again for me”.

He prayed God to accept his soul and comfort his family and all those he left behind.