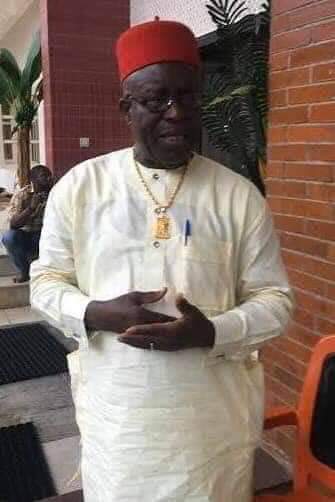 The Governor of Abia State, Dr. Okezie Ikpeazu has expressed deep grief and sadness at the news of the death of Chief Dr. Sir Anthony Obiagboso Enukeme, the Chairman of TONIMAS NIGERIA LIMITED.

The Governor described the Late Chief Enukeme as an outstanding and committed entrepreneur who made very solid contributions to the economic development of Aba and Abia State through his numerous business concerns scattered across the State.

Governor Ikpeazu recalled with gratitude, the countless jobs created for the people of Abia State through the entrepreneurial versatility of the Late Chief Enukeme, and further described him as a most worthy partner of the Abia State Government in the quest for the development of the economy of the State.

In the words of the Governor, “The Late Chief was not just an ordinary businessman who was content with buying and selling. He was more than that. He was a committed and passionate believer in the power of industrialization as a key enabler in economic development. He invested heavily in the establishment of industries which produced top quality products in the area of Oil and Gas, and of course created a sustainable platform for job creation for our people”.

Continuing, Governor Ikpeazu stated that “though the late Chief was from Neni in Anambra State, he found a home in Aba and Abia State. He believed in Aba and Abia State, and deliberately chose the Enyimba City as the Headquarters and epicenter of his sprawling business empire, from where he branched out to other parts of the country”.

“From humble beginnings in Aba several years ago”, the Governor noted, “Chief Enukeme, by a dint of honesty, hardwork, perseverance, diligence and the fear of God, successfully built a TONIMAS GROUP which is today clearly the largest privately owned business conglomerate in our space with sprawling interests in Oil and Gas, Real Estate, Manufacturing, etc. Through the efforts of TONIMAS, Aba became counted as the home of top quality lubricants and engine oil”.

“Today, the business landscape in Aba and indeed Abia State is dotted with positive evidences of the sagacity and entrepreneurial acumen of the Late Chief”, Governor Ikpeazu added.

A principal member of the Aba Business Community, Governor Ikpeazu recalls that the late Chief Enukeme had in the past served as President of the Aba Chamber of Commerce, Industries, Mines and Agriculture (ACCIMA).

“One special attribute that stood the Late Chief Enukeme out was in his personal belief in the philosophy of Corporate Social Responsibility. He saw communities where his businesses are located as critical stakeholders in his business and took measured steps to give back to such communities”, the Governor added.

Governor Ikpeazu recalled how the late Chief Enukeme contributed immensely to the development of the Umuarakpa Community and its environs in Osisioma Ngwa LGA where his Industry is located by constructing access roads and assisting in other areas of community development, as well as ensuring that indigenes of the community are employed by the company.
As a devout Catholic, he built and donated to the host community, a most befitting Catholic church.

“The death of Chief Enukeme” , the Governor noted further, has robbed Abia State of one of its most important, passionate, committed, successful and consistent entrepreneurs, and an eminent philanthropist.

He was a worthy recipient of the title of ENYI ABIA conferred on him by the Abia State Government.

Governor Ikpeazu challenged the children of the Late Chief to “take up the mantle and keep the flag flying”, expressing confidence that since Chief Enukeme while alive, groomed his children well and made them key parts of his business empire, they will accept the challenge and build on the powerful legacies of their very illustrious father.

The Governor, on behalf of his family, the Government and People of Abia State, sends his deepest sympathies to the wife, children and entire Enukeme family, and prays the Almighty God to grant him eternal rest.