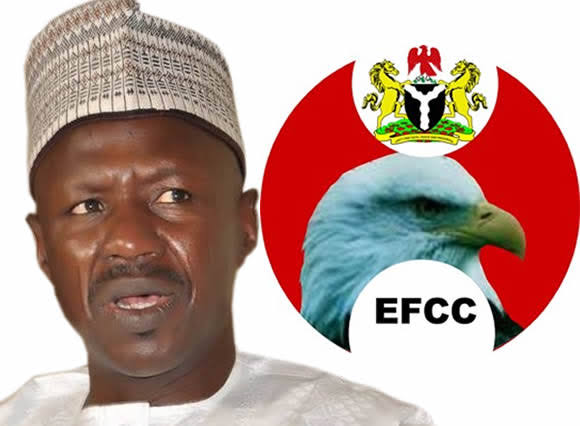 Barring last minute reprieve, Acting Chair­man, Economic and Financial Crimes Commission (EFCC), Ibrahim Magu, may not only be on his way out of office, but also may be looking towards days of accounting for alleged infrac­tions preferred against him by Attor­ney General of the Federation (AGF) and Minister of Justice, Abubakar Malami.

According to Saturday INDEPENDENT, impeccable presidency sources said on Friday that President Muhammadu Bu­hari had given Malami approv­al to investigate and prosecute Magu following his memo­randum, where he itemised 22 weighty allegations against the EFCC chairman, who has occupied the office for nearly five years in acting capacity.

The sources said the EFCC chairman will temporarily hand over the anti-graft agency to the next most senior person, Mohammed Umar Abba, Direc­tor of Operations of the agency.

Malami had also included a short list of three candidates for consideration to replace Magu. Our sources said FCT Commis­sioner of Police, Bala Ciroma, may ultimately replace him, be­ing the most favoured among the three names Malami sub­mitted to the president.

One of the sources said the president wanted the panel to investigate the authenticity of the property and proxy alle­gations against Magu, noting that “because of the weight of the allegations, and the kind of person managing the EFCC, the president wouldn’t want to take any decision in a hurry. So he made sure a crack team is assembled to look into the matter holistically.”

According to him, Ayo Sala­mi, former President of Court of Appeal, is heading the panel with the offices of National Se­curity Adviser (NSA); Director General, Department of State Services (DSS); Director Gen­eral, National Intelligence Agency (NIA), the Police, and Attorney General of the Fed­eration as members.

According to the source, the panel has two weeks to submit its report to the president, but had already done a week.

Malami, had in his mem­orandum to the president, made allegations bordering on financial malfeasances in failure to declare actual mon­ey recovered from looters. He also accused Magu of gross in­subordination, refusing direc­tives from the commission’s supervisory ministry; and as a result, the Federal Govern­ment has come under severe attack and embarrassment on account of odium stemming from poorly pursued investiga­tions. The AGF’s memo made strong innuendos purporting that Magu has made himself a willing tool in the hands of politicians thereby reducing the sterling reputation EFCC once enjoyed.

Sources at the presidency insisted on Friday that Buhari has indeed signed off on the memo only awaiting imple­mentation.

Sources at the presidency insisted on Friday that Buhari has indeed signed off on the memo only awaiting imple­mentation.

“By the recommendation, Magu should be eased out of office, and prosecuted on the strength of the allegations made against him,” explained a presidency source to the newspaper, who said the presi­dent was livid after reading the memo.

Adding further, the sources said that had the matter rest­ed squarely on just Malami’s memo, maybe a form of re­prieve could have been worked out for the commission’s chair­man.

“Malami was extensively debriefed on the matter. Securi­ty agencies were also involved in the matter and they all came back with damning verdicts,” the source added.

So far, the presidency has refused to say much on the matter.

In a text message response by Senior Special Assistant, Media and Publicity to the President, Mallam Garba She­hu, asking for confirmation on whether Magu will be eased out, the presidential spokes­man simply said, “I don’t know the answer to your question.”

Several attempts at reaching Dele Oyewale, Head, Media and Publicity, EFCC, yielded no re­sult as his phones continued ringing without the calls being picked up. However, another source within the commission told the newspaper that there cannot be any official response from EFCC unless matters are directed at them.

But as also learnt, Magu is said not to be leaving anything to chance. It was learnt that some of his backers with link at the Presidential Villa have been putting in words for the embattled anti-graft’s czar, tell­ing Mr. President that Magu is being hounded by corrupt politicians.
One of the result of the alleged brokering resulted in Magu being seen at the Aso Rock mosque where he ob­served the Jumat with Presi­dent Buhari.

As learnt, the EFCC boss was there to have an audience with the president.

It was, however, unclear if the mission succeeded as at the time of filing this report.

It would be recalled that in 2016, the Senate declined to confirm Magu’s appointment as EFCC chairman, citing a Department of State Services (DSS) report, which revealed unsavory activities.

Despite the Senate’s rejection of Magu, President Buhari re-nominat­ed him, but the Senate again rejected him

It should be recalled that the 8th Senate refused to confirm Magu as substantive Chairman of the EFCC owing to a damaging report by the DSS.

In the report, the DSS said Magu was involved in various fraudulent acts.

The report reads in part; “Magu is currently occupying a residence rented for N40m at N20m per annum. This accommodation was not paid [for] from the commission’s finances, but by one Umar Mohammed, air commodore retired, a questionable businessman who has subsequently been arrested by the secret service.

“For the furnishing of the residence, Magu enlisted the Federal Capital Development Authority to award a contract to Africa Energy, a company owned by the same Mohammed, to furnish the residence at the cost of N43m.

“Investigations show that the acting EFCC chairman regularly embarked on official and private trips through a private jet owned by Mohammed.

“In one of such trips, Magu flew to Maiduguri alongside Mohammed with a bank MD who was being investigated by the EFCC over complicity in funds allegedly stolen by the immediate past petroleum minister, Diezani Alison-Madueke.

“Furthermore, the EFCC boss has so far maintained a high-profile lifestyle. This is exemplified by his preference for first-class air travels.

“On 24 June, 2016, he flew Emirate airlines first-class to Saudi Arabia to perform lesser hajj at the cost of N2.9m. This is in spite of Mr President’s directive to all public servants to fly economy class.

“Magu has fostered a beneficial relationship with Mohammed who by his confession approaches clients for possible exploitation, favours and associated returns.”