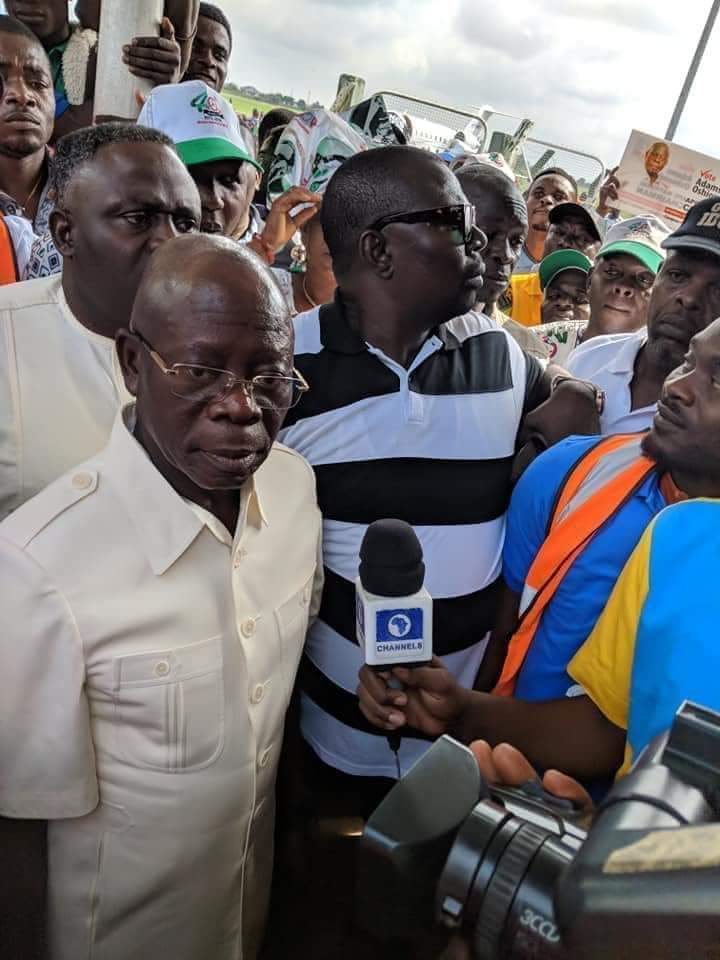 Ever since Adams Oshiomhole was (s)elected as the All Progressive Congress, APC National Chairman, he hasn’t failed to show through his overzealousness and uncouth mannerisms, that the vehicle he took over as its driver is heading into abyss.

From that day till now, it has been one tale of negative adventure to another. He is driven by egoism and desperation to impress his master. And, from all indications, his dangerous drivings are counter productive to the party APC, and the polity at large.

Many people, systems and the APC party have started bearing brunt of Oshiomhole’s garrulousness, unguarded manipulations and uncontrollable navigations.

It wasn’t long he mounted the saddle, Ekiti gubernatorial election came on, and he supervised and superimposed one of the greatest electoral frauds that subverted the will of the people and produced a written result in favour of APC.

Thereafter, he took on the Federal Minister of Labour and Productivity, Dr. Chris Nwabueze Ngige over a presidential directive. Oshiomhole flippantly usurped the position of the President by threatening to sack Ngige as a minister. He had earlier denigrated the person and office of the President by saying that he tolerates the dishonourable dispositions of those he appointed.

Shortly after that, APC started witnessing implosion that factionalized the party. And, that fractionalization gave birth to R-APC. The birth of R-APC culminated into the recent historic gale of defections that took place, and still ongoing.

Oshiomhole created the pathway to these defections by hijacking the control of the party from many party heavyweights, even the Senate President, Dr. Bukola Saraki. And, in their displeasures and protests, they considered following the exit door as the best alternative decision for them.

Since Saraki’s exit from then APC, Oshiomhole has been breathing fire and brimstone, threatening heaven and hell about his resolve and insistence on removing the Senate President who had defected to the opposition party, the PDP.

In making his incoherent remarks, he has been abrasive in the use of words, uncouth, unreasonably loquacious and overstepping his boundaries, forgetting that party chairmanship is different from the country’s leadership.

While all these are going on, political analysts in their forecasts foresaw that his methods are more destructive than edifying. Some infer that it won’t be long before he runs the party vehicle he was brought to pilot aground.

As we speak, indications are brazenly obvious that if he is not pruned and called to order, his dangerous driving is heading into the irretrievable depths of the abyss.

Today, Adams Oshiomhole in his desperation to have his “powerful way”, by removing the leadership of the Senate, allied with the Director-General of the DSS, Lawal Daura, mobilized and induced the senators of APC faction, for the purpose of commencing their purported impeachment process, but ended up misfiring.

Now, as the matter has been reported to the international community, the leadership of the country under the control of the Acting President, Prof. Yemi Osinbajo, rising to cover the tracks of government and governance, attempting to redeem the battered image of this current administration, rose in an emergency meeting with the security agencies, and relieved the appointment of the Director-General of the DSS, Lawal Daura.

With the way this “expert” driver of APC is going in his dangerous driving, if he is not called to order, he will record great victims than victors in this adventurous navigation.