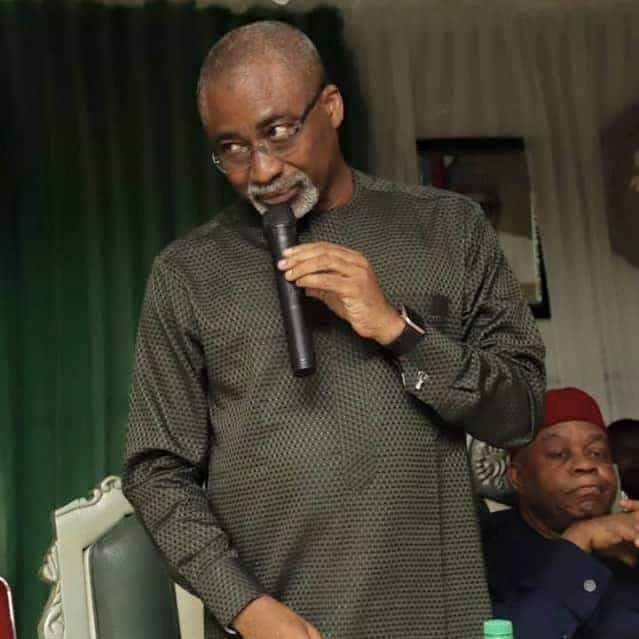 The Senator representing Abia North at the Red Chamber, Distinguish Senator Enyinnaya Abaribe has break silence, reply those calling for his arrest to first go after Fulani herdsmen.
It could be recalled that earlier this month, Senator Abaribe granted a media interview where he affirmed to vote for the Sovereignty of Biafra if the need arises and the video was said to have gone viral all over the internet.
Since then, the President’s media aides had taken to the internet to call for the immediate arrest of Senator Abaribe over that interview, stating that it’s against the rules and regulations of Nigeria that a serving Senator should be supporting a group proscribed as terrorist group by the President of the country.
Senator Abaribe in reiteration asked them to first of all go after the Hausa Fulani herdsmen scattered all over the country and arrest them all before they could call for his arrest.

According to him, “It’s quite unfortunate that we found ourselves in a government that has no respect for constituted authorities. It’s unfortunate that the Muhammadu Buhari media aides has now taken power from the President to call for immediate arrest of a Distinguish Senator of the Federal Republic of Nigeria.

A common media aide and the President will not say anything, after all I’m not surprised because whatsoever happens in this country, he is not aware and how will he be aware that his media aides has taken power from him. I weep for this country.

“Those his media aides are not seeing the evil that are being perpetrated by the Hausa Fulani herdsmen all over Nigerian, killing and raping our women and as a senator representing my people, you want me to keep quiet. Of course that will not happen.

“As for the IPOB issue that made those unelected media aides to call for my arrest, i have no regret over the interview. Tell me one single person an IPOB member has killed in this country and I will show you the graves of thousands of lives that has been sent to an early grave by Hausa Fulani herdsmen, yet the President doesn’t want to say anything.

“I am an Elder and an Igbo man and I cherish my foundation and will not do anything to hurt my people. Igbos are the most successful tribe in Nigeria because of our hardworking. If other Elders in Igbo land can be bought over as a result of their political ambitions to kill their own children and tagged them terrorists because they want freedom, I Senator Abaribe will not be part of it.

“The day they proscribed IPOB a terrorist group, when we get to the Senate I was the one who raised a motion against it and stood firmly against it at the Senate Chamber. You don’t expect me to be there while you proscribed my own children who can’t hurt a fly a terrorist while living yours who kill people everyday at will to walk around freely.

“If you want to arrest me for telling you the truth, then first of all go after all the Hausa Fulani herdsmen in Nigeria, arrest them all, go after Boko Haram, arrest them because all these evil terrorists groups are all from the North. When this is done, I will freely hand over myself to your police”