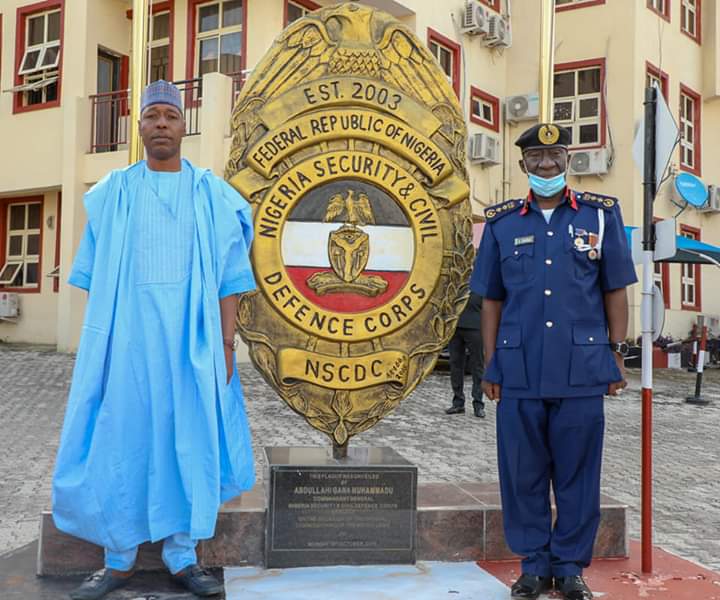 Borno State is so far the most active in the use of specialized agro rangers to provide security to farmers and farmlands, commandant general of the Nigeria Security and Civil Defence Corps, Abdullahi Gana Muhammadu declared today, Wednesday.

The commandant spoke when he hosted Governor Zulum at the NSCDC’s National headquarters in Abuja.

“Part of NSCDC’s mandate is to provide security to agro-allied investments. We came up with agro rangers as a national programme in which we have specialized armed personnel dedicated to securing farmers and farmlands in areas that is required. Borno in collaboration with our command in the State was the first to launch agro rangers in August last year during which Governor Zulum led the launch with a donation of 15 surveillance vehicles to the rangers. This was beside other forms of support. Borno leads the way on this” commandant Muhammadu said.

The commandant general thanked Governor Zulum for his untiring support to the NSCDC and commitment to securing farmers in order to encourage agricultural activities and increase food supply.

Borno State Government and the Nigeria Security and Civil Defence Corps, NSCDC, is to collaborate in commencement of a “well structured volunteer programme” that will involve the training of residents in civil protection.

The partnership followed a request by Governor Babagana Umara Zulum on Wednesday, during his visit to the National headquarters of the NSCDC in Abuja.

“Part of my mission here is to request for partnership between Borno State Government and the NSCDC so that we come up with a well structured volunteer programme. We will lawfully and carefully select youths who are willing to provide volunteer services for the NSCDC to give them very good training on civil protection. That way, they will complement the gold efforts of our security establishments in enhancing community policing in our State. The advantage of our youths is that they are conversant with the nooks and crannies of Borno. They will be very useful” Zulum said.

Commandant general of the NSCDC, Abdullahi Gana Muhammadu gave immediate approval to Zulum’s request with a promise that the corps will ensure very good training for the volunteers so that they complement efforts of security establishments in community protection.

Meanwhile, Governor Babagana Umara Zulum on Wednesday approved the allocation of land to the Nigeria Security and Civil Defence Corps for construction of its northeast zonal office in Maiduguri.

Zulum announced the approval during his meeting with commandant general of the NSCDC, Abdullahi Gana Muhammadu at the corps’ headquarters in Abuja.

The Governor told the commandant that he had directed the allocation and the land was ready for takeover by the NSCDC.

Zulum promised that in addition to the land, Borno government will increase support to the NSCDC.

The governor described the corps commandant in Borno state as dedicated, intelligent and composed officer, noting that all needed support will be accorded to him to continue his good works that benefit Borno citizens.

Zulum however requested an increase in the number of armed personnel deployed as agro rangers by the NSCDC.

For security considerations, the governor neither disclosed the number required not that of those currently operating as agro rangers across farmlands in Borno State.