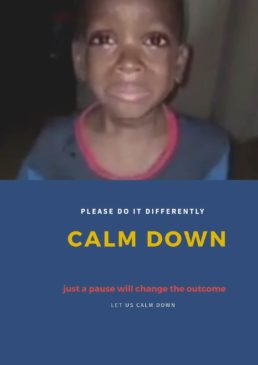 The little boy in tears that was captured in a viral video begging her mother to calm down, dubbed ‘Mummy Calm Down Boy’ has been appointed Ambassador by a non governmental organisation at the forefront of the fight against domestic violence.

The organisation known as Combat Domestic Violence and Abuse Foundation, is in search of the ‘mummy calm down Boy’ to decorate him as the brand ambassador of the foundation.

In statement, the foundation, which has adopted ‘Calm Down’ as their slogan enjoined Nigerians to help them locate the Boy for his crown of peace.

The statement reads:
“We, the president, (Chief Dozie Kaidi Obiaku), members and trustees of the Combat Domestic Violence and Abuse Foundation would like to enjoin the general public to help us get to the boy in the viral video.

We would love to make him an ambassador.

Every violence in the world could be avoided if we learnt to clam down.

We have adopted ‘Calm down’ as a key mantra now and we would love to bring the boy in as one of us.

Please help us find him. Thank you.” said the president.