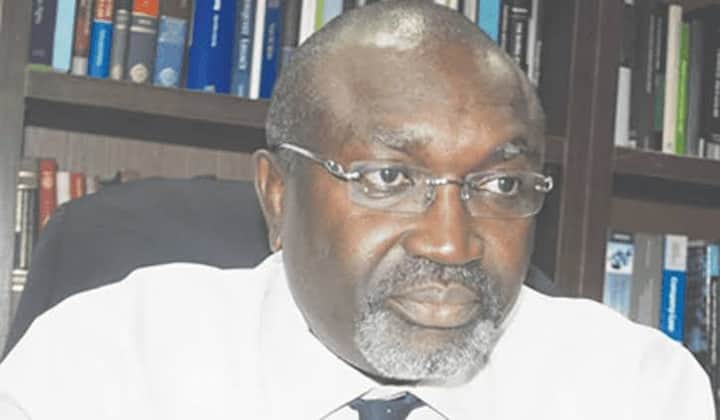 He, however, said amid several demands for his pay, Magu ordered his detention and prosecution on trumped up charges of bribing a judge.

Obla said this while reading out an 18-page letter to the Justice Ayo Salami-led Presidential panel titled, ‘Presentation In Respect of Malicious and Reckless Abuse of State Power of Investigation and Prosecution Resulting in Mismanagement of Forfeited Assets by Deliberate and Contrived Incompetence and Suspicious Dealing of Forfeited Assets’.

The senior advocate testified before the panel in the presence of Magu at the Banquet Hall of the Presidential Villa on Monday. He also presented 12 questions to the panel which he said the suspended EFCC chairman must answer and made five recommendations

Obla, who presented over 10 documents to the panel including his bill of charges, said he prosecuted 40 cases for the EFCC including those of former bank chiefs sacked by the Central Bank of Nigeria under the leadership of Lamido Sanusi and also helped the commission recover hundreds of billions of naira in cash and assets.

He said, “As of date, the EFCC owes me an outstanding balance of N685, 389, 928.10 and $202,460.47 (N78.5m) or its naira equivalent at the prevailing Central Bank of Nigeria exchange rate, together with interest at prime lending rate, being professional fees for the prosecution of over 40 high profile cases. See Statement of Claim in Suit No: FCT/CV/3220/17 BETWEEN Obla v. EFCC.”

The senior advocate said all subsequent letters sent to the EFCC were ignored but the fee was never contested. He said rather than pay him his legal fees, Magu decided to level several allegations against him in order to discredit and deny him his due.

“In effect, Ibrahim Magu deliberately and maliciously denied me the fruits of my services for EFCC whilst putting me to great expense to defend a worthless charge,” the lawyer said.

The senior advocate, who helped the EFCC to secure the conviction of a former Director-General of Nigerian Maritime Administration and Safety Agency, Temisan Omatseye, in 2016, said he in the course of the case which lasted for six years, he travelled from his base in Abuja to Lagos several times and made 46 court appearances but was not paid a penny.

He said despite securing the conviction for the EFCC, Magu accused him of bribing Justice Rita Ofili-Ajumogobia to secure the conviction.

Obla said, “I have never made any payment of N5m or any other amount to Justice Ajumogobia. To the best of my recollection, the payment of N5m under reference was a payment I made on May 21, 2015 to a company named Nigel & Colive Nig. Ltd, for the purchase of building materials for my construction site in Abuja (now my present office building).

“At that material time of this commercial transaction and till date, I had no prior knowledge that Justice Ajumogobia had any interest whatsoever in the company.”

The senior advocate said based on the allegations, he was informed by EFCC prosecutor, Rotimi Oyedepo, that Magu, had personally directed that he be detained and he remained in custody for 21 days before he was subsequently arraigned alongside the judge.

The senior advocate called on the Attorney General of the Federation, Abubakar Malami (SAN), to ensure that the frivolous criminal charges brought against him were withdrawn.

Obla said after he received a letter of disengagement from the EFCC, he turned in all files and gave his professional opinion on how to ensure that the cases continue seamlessly.

The senior advocate said Magu went ahead to unceremoniously redeploy the Head of Legal Department, Chile Okoroma, who was assigned those cases.

Obla added, “Secondly, material evidence, which we returned to EFCC custody, were seemingly, withheld from him as he severally reached out to my office for help. Next, when it seemed that Mr. Chile was gaining some traction with the pension fraud cases, Ibrahim Magu conveniently despatched Mr. Chile off to National Institute for Policy and Strategic Studies, Kuru, thus foisting a constructive abandonment of the pension fraud cases.

“In 2016, when Ibrahim Magu took over the files, those pension fraud cases were all part-heard in various courts of the Federal High Court, Abuja. Today, most of those cases are now in limbo and constructively abandoned.

“It has been suggested that one of the reasons why the Pension Fraud prosecutions have been stalled/frustrated has to do with the interest of one Alhaji Ali Abatcha who is a kinsman of Ibrahim Magu. The said Alhaji Ali Abatcha was the president of the Nigerian Union of Pensioners and was undergoing prosecution by myself before Mr. Magu took over. The status of this case and others should be reviewed.”

When contacted on the telephone, a lawyer to Magu, Tosin Ojaomo, said it was unfortunate that the panel could invite someone facing corruption charges to testify against Magu.

Ojaomo admitted that Obla was being owed funds but said the EFCC had to verify the fee before payment could be made.

“Really it’s inexplicable, unexplainable, strange and the height of absurdity for a panel on a serious matter like this kind of investigation to be inviting suspects standing trial to testify against their prosecutor.

“The salami panel is offering its platform to those aggrieved one way or the other against Magu by inviting them to make presentations. The presentations/ allegations were not made available to Magu.

“Even elements with pending corruption cases in court are invited. People being prosecuted by the prosecuting agency are making wild allegations even when pending allegations have yet to be cleared in court.”