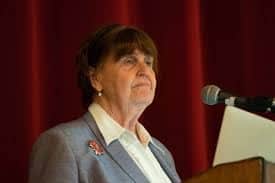 Member of the British House of Lords has joined a growing number of Nigerians in the Diaspora and others from three continents to petition the chief prosecutor of the International Criminal Court to investigate “ongoing genocide” in parts of Nigeria, which had been likened to images from Darfur.

Baroness Caroline Cox of the British House of Lords, a consistent and outspoken champion of global human rights and religious freedom, added her signature to the petition.

The petition, titled: “ICC IS FAILING NIGERIA: Act Against Genocide Now” accused Madame Prosecutor of dragging ICC feet on genocide in Nigeria for too long.

The petitioners argued: “Till this date, your office has not identified and declared perpetrators of the terrorist genocide in Nigeria wanted, as you continue an endless ‘preliminary examination’, while atrocities continue on a daily basis.

Timeline of killings in Southern Kaduna
According to the petitioners, “in the space of a week, the people of Southern Kaduna experienced a devastating series of attacks in Nigeria’s pernicious mid-grade genocide.

“For your information, here are just some of the atrocities: Zipak, a semi-urban town in Fanstwam Chiefdom, Jemaa LGA in Southern Kaduna, suffered the killing of 10 people when a militia attacked at 7p.m, Friday, July 24, 2020.

“Though Zipak is just about two kilometres from the heart of Kafanchan, where there is presence of a cantonment of the Army, Police and Paramilitary units, the attacking Militia had a field day.

“The governor of Kaduna State immediately imposed a 24-hour curfew over the entire Jemmaa LGA.

However, it was under the curfew that the militia returned on July 25, to wreak more havoc on the community still in shock and mourning from the previous day’s massacre.

“Also, as it rained around 8.00 pm, Thursday, July 23, 2020 at Agwala Magayaki of Doka Avong, Kajuru LGA in Southern Kaduna, armed Fulani militia took advantage of the darkness and torrential rain and attacked the village for the second time in a month, leaving seven persons dead.

They further recalled that on June 20, 2020, the same village was invaded by the militia, some known by the villagers, and seven persons were killed.

Continuing, the petitioners said that on July 22, 2020, as it rained on Kizachi in Chawai chiefdom, Kauru LGA in Southern Kaduna, the militia broke into homes, and attacked villagers with knives, daggers and matchetes.

They said in that encounter, the following people were killed: Kefas Monday (17), Lydia Monday (14), Jummai (9), Giwa Thomas (14), and Living Yohanna (27) bringing the number of harmless Southern Kaduna natives killed to 23 in 72 hours.

This, according to the petitioners, is apart from over 40 murdered victims of militia in Kaura and Zangon Kataf, also in Southern Kaduna days earlier.

Community leaders stated that: “These and several others have created a humanitarian crisis in Chikun, Zangon Kataf, Kaura and Kajuru LGAs as thousands of IDPs can barely survive hunger, sickness and various trauma.

“It is, therefore, totally untrue that the mass murder of our people is an outcome of clashes between criminal gangs as portrayed by President Muhammadu Buhari, through his spokesman, Shehu Garba.

“Our victims are not members of criminal gangs, but mostly kids, women and the aged. The so-called formidable security arrangement he claimed to be in place in Southern Kaduna is at best, a ruse and a mirage, going by increasing casualties and the impunity of the armed men.

“We are under a genocidal campaign by a militia, who have become sacred cows with President Buhari and Governor Nasir El-rufai, who are both Fulani, twisting the truth to say the Fulani are on ‘reprisals’.”

The petitioners also listed separate violent attacks on five Christian communities in Southern Kaduna that left dozens of innocent Christians dead and their houses burnt, maintaining that apart from the atrocities of the killer herdsmen in Nigeria’s northwest, terror group, Boko Haram, struck in the North-East as well.

“On Wednesday, July 22, Nigeria has cemented its record as a graveyard for aid workers with Boko Haram’s release of another execution video.

“The latest executions of five, maintain the statistics of one aid worker killed every quarter for the last 10 years straight — a factoid of grave concern for internationally protected persons.

“Luka Philibus was a 30-year-old employee of an NGO. He was a member of EYN church (which has lost over 10,000 members to terrorism).

“He and his family (12 brothers and sisters and aged parents) have been displaced from their community in Gwoza, Borno State for six years. Luka began working for the NGO just last year. This is not the first time staff of the NGO have been abducted. Luka lasted seven weeks in captivity.

“Abdurlhaman Bulama was also an Aid worker. Married with two children, his hospitality was legendary. A fellow Aid worker said that Abdulrhaman was a great guy. He even brought his wife to visit us in Maiduguri.

“I have visited almost everywhere in Northern Borno, from Dikwa, Marte, Gamboru-Ngala, Baga, Gozamala, Abadam, Ngazai, Gubio etc and have met so many people, but Mr Bulama is exceptional.

“He was a man you can count on any time. He was kidnapped by ISWAP on June 1, on his way to his hometown Monguno but never returned.

“He was a man of his words. I am so sad that Mr Abdulrhaman is amongst those Humanitarian Aide Workers cruelly assassinated by Boko Haram Terrorist group.” Bulama was Muslim.

Yakubu Ishaya Chirama is believed to be one of reportedly two men from Chibok who were amongst those executed. They were Christians.

It is to be noted that although Boko Haram’s stated objective is the extermination of Christianity, western democracy and imposition of an Islamist theocracy, Muslims are often collateral victims of the genocidal terrorism and Muslim government workers are subject to execution as well.

The execution video came days after the multiple bloody massacres in Kaduna which were also religious-based attacks. This compelling video from Southern Kaduna drives home the urgency of action to stem the genocide.

The petitioners stated further: “With regard to Fulani Herdsmen killings, there have been no arrests and prosecutions, despite thousands killed.

“Not since 2010 when killer Fulani herdsmen were imprisoned for the Dogo Nawaha massacre in Plateau State has anyone been convicted.

“We urge you, therefore, to make a determination that: Nigeria has failed the complementarity test and has not adequately addressed these crimes against humanity in domestic courts;

“That Nigeria’s mass release of Boko Haram suspects has actually engendered impunity and endangered communities further and that Nigeria’s failure to prosecute killer herdsmen is implicit support and or enabling of their genocidal actions, given Buhari’s own Fulani antecedents and activism.”

The petition was made available to Vanguard by Emmanuel Ogebe, Special Counsel, Justice for Jos Project, US Nigeria Law Group, Washington.