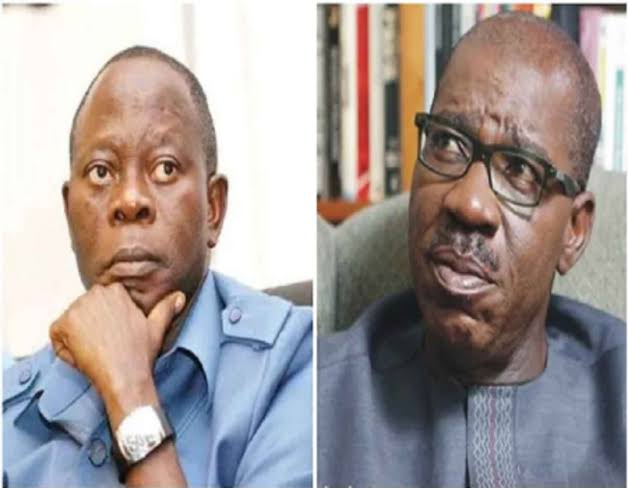 The immediate past National Chairman of the All Progressives Congress, APC, Comrade Adams Oshiomhole, has said that the party would not fold its arms and watch Governor Godwin Obaseki and the Peoples Democratic Party, PDP violently rig the September 19 governorship election, saying ‘’we will meet violence with violence.’’

In an interview on Arise Television, yesterday morning, Oshiomhole, who restated the reasons he is opposing Obaseki, and backing Pastor Osagie Ize-Iyamu picked holes in Obaseki’s alleged threat to deal with APC members and supporters in the guise of dealing with trouble makers.

On Sunday Governor Obaseki warned of stiff penalties against perpetrators of violence ahead of the poll and condemned the July 25 display by thugs at the gate of the Palace of the Omo N’Oba N’Edo Uku Akpolokpolo, Oba Ewuare II, the Oba of Benin.

Obaseki warned those intent on disrupting public peace stating that he is determined to carry out his primary responsibility of maintaining order and protecting lives and property as the Chief Security Officer of the state.

Reacting to Obaseki’s threat, Oshiomhole said: ‘’if they want violence, we will give them violence.’’

He said he is against Obaseki because the governor has not met the expectations of Edo people, abandoned the development plan of the state, wrote a petition to the President to get Dr Pius Odubu dropped as NDDC chairman; as well as a commissioner of the NDDC from Edo, making the state to lose two positions in the commission.

Regretting that he worked with Obaseki in 2016 without asking for his certificate, Oshiomhole said he was given wrong accounts of Ize-Iyamu four years, adding that Ize-Iyamu had not been a governor and he could not have said that the APC candidate is a thief.