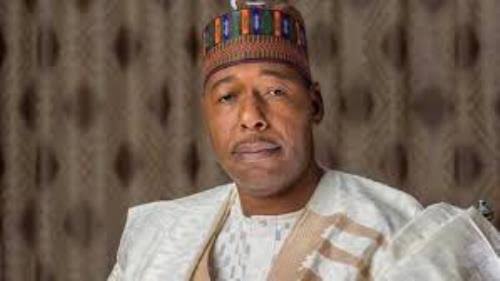 Governor Babagana Zulum of Borno State has received a seven-day ultimatum to apologize to President Muhammadu Buhari and the Nigerian military over a series of false accusations levelled against troops on the frontlines.
The North East Peace Assembly (NEPA) said failure to do so means he would be compelled to tell the world about his secret pact with Boko Haram and its sponsors.
This was contained in a statement signed by the group’s leader, Mallam Musa Babangida, on Saturday, following an investigative report which rubbished the governor’s latest allegation claiming troops’ involvement in agricultural activities in the northeast.
In the statement titled, “Gov. Zulum; reclaim your honour by tendering an unreserved apology to Nigerian Army for consistent defamation of character”, the North East Peace Assembly demanded that Zulum do the needful to redeem his already battered image.
It said the governor is fast “carving a niche for himself as an astute fabricator/inventor of sensational fake news” and Nigerians now perceive him as “one of the many covert forces promoting Boko Haram terrorism in Nigeria”.
“The North East Peace Assembly (NEPA) wishes to animate the conscience of Borno state Gov. Babagana Umara Zulum to claim his honour and dignity for unswervingly portraying himself as a leader who regales in peddling blatant lies on the Army. He must do it within seven days of this publication and upon failure, Nigerians should compel him to tell the rest of the world, the secret pact he has signed with Boko Haram and its sponsors,” the statement reads.
“This reminder and even outright request to Gov. Zulum is prodded by the findings and release of the report of an Investigative Team set up by the Army leadership to verify the authenticity of Zulum’s latest allegations that soldiers in the war front have coercively seized farmlands and fishing rivers from locals and converted same for personal farming and fishing activities.
“For the records, let us remind the disco-ordinated Gov. Zulum that the Nigerian Army under the leadership of Lt. Gen. Tukur Buratai is too professionalized and disciplined to engage in such acts of subversions and maltreatment of the same people it has devoted years to exculpate from the shackles of Boko Haram terrorism.
“Additionally, like the falsity of the seizure of farm and fishing enclaves; Gov. Zulum’s hasty conclusions that soldiers were behind the Boko Haram attack on his convoy near Baga is the most absurd, illogical or ridiculous reasoning and conclusion by a leader of his status. Gov. Zulum is fast carving a niche for himself as a purveyor of twisted facts and astute fabricator/inventor of sensational fake news.
“Nigerian troops in the battlefield have never engaged in any act of sabotage or complicity in the counter-insurgency operations; inclusive of Zulum’s wretched farming and fishing allegations and the alleged attack on his convoy by  Boko Haram in Borno state. For the umpteenth time, the Special Investigative Panel has exonerated soldiers of any sabotage or complicity as bandied by Gov. Zulum or others before him.”
Beyond mere apology, the group, however, asked the governor to comply and support the fight against insurgency in Borno.
“We strongly believe this is the only alternative at the disposal of Gov. Zulum now and he must bring his head down to comply in the interest of peace. It is only then, Nigerians will know, he is truly committed to the war against insurgency in Borno State.
“However, should Gov. Zulum be obstinate over this plea or fails to tender the apology, it will show clearly that the Governor knows what the rest of Nigerians don’t know about Boko Haram and definitely unhappy that Nigerian troops are in Borno to defend the country.”