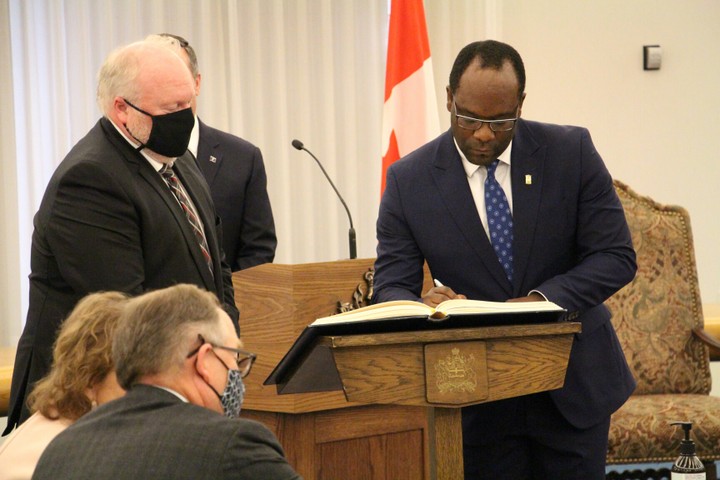 The Canadian Province of Alberta has appointed a Nigerian man, Kelechi Madu, as new Justice Minister and Solicitor General in Canada.

The Province Premier Jason Kenney announced it on Tuesday.

He said Madu is Alberta’s new justice minister and solicitor general during a cabinet shuffleboard.

Reacting via his Twitter handle, Madu said : “Thank you, everyone, for all the well wishes. I am beyond humbled to accept my new role as Minister of Justice and Solicitor General – where I will pursue fairness, equality, and justice for all with every ounce of strength I have.”

More About Minister of Justice

Honourable Kaycee Madu, QC (Queens Counsel) was born in Nigeria and was elected in the 2019 Alberta general election to the Legislative Assembly of Alberta representing the electoral district of Edmonton-South West. On 30 April 2019, Madu was appointed to the Executive Council of Alberta as the Minister of Municipal Affairs, and held that role until August 25, 2020 when he was appointed Minister of Justice and Solicitor General.

On March 4, 2020, Kaycee Madu was designated as a Queen’s Counsel by the Lieutenant Governor of Alberta via an Order-in-Council. Queen’s Counsel is the highest honour awarded to lawyers who have made significant contributions to the advancement of law and society.

Mr. Madu has been a lawyer for 16 years, practising in both Nigeria and Alberta. He operated a law office with his wife and has worked for Legal Aid Alberta. He volunteers with the Edmonton Community Legal Centre and the lawyer referral program of the Law Society of Alberta.

Mr. Madu was awarded the Premier’s award of excellence in the bronze medal category in 2009 with a team of his colleagues at the Government of Alberta, where he worked as a senior technical advisor focusing on legislative and regulatory reviews, operational and strategic public policies, issues management and stakeholder consultation.

Born and raised in the southeastern part of Nigeria, Mr. Madu graduated from the University of Lagos with a bachelor of laws honours degree in 2001. He and his wife, Emem, migrated to Canada in 2005 and have three children.

He was the 927th Member to be sworn in to the Legislative Assembly of Alberta.

I wish you Hon Kaycee Madu, QC a fruitful tenure and may the people of Alberta be blessed by your leadership.

This will help to strengthen our relationship with Nigeria.