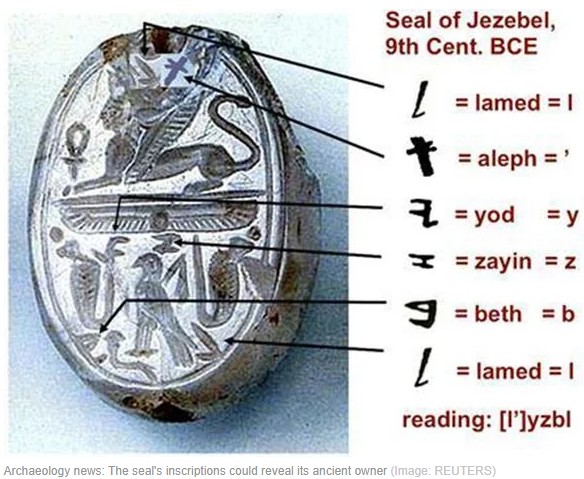 The Holy Bible is rife with villainous figures, from the deceptive Delilah to the murderous King Herod. But one figure that stands out in the Bible’s Book of Kings is Queen Jezebel, whose name is believed to have adorned some World War II missiles.

According to the Biblical narrative, Jezebel was the wife of Ahab, King of Israel, and the daughter of Ithobaal I of Tyre.

The evil Queen is, perhaps, best known for plotting the murder of Naboth the vineyard owner, and her brutal death at the hands of Jehu.

Although the historical record of Jezebel’s rule has been debated by theologians and historians alike, evidence may have emerged to prove Jezebel was real after all.

According to Tom Meyer, a professor in theology and Bible studies at Shasta Bible College and Graduate School in California, US, a small ninth century BC seal bearing Jezebel’s name could be enough to validate the Bible’s narrative.

He told Express.co.uk: “A small but spectacular archaeological discovery has come to light relating to one of the Bible’s greatest villains; the item is the personal seal of the evil queen Jezebel.”

The seal was anonymously donated to the Israel Department of Antiquities in 1964. As a result, archaeologists have been unable to determine where the seal was recovered.

But there are some clues on the 1.25-inch seal that shed light on whom it may have belonged to.

Professor Meyer said: “Not only does the seal have the name Jezebel or (L’)YZBL inscribed upon it but also contains many rare and interesting features fit only for a queen.

“At the top of the seal is a crouching winged Egyptian sphinx with the face of a woman.

“To the left of the sphinx is the Egyptian symbol of fertility the ankh.

“Below this is a line that has a winged disk – also found stamped on Israelite lmlk seals – and an Egyptian falcon who is flanked by cobras, a common symbol of the Egyptian/Phoenician monarchy.

“Below the falcon is a lotus, a common symbol of a female. Then the name YZBL is inscribed at the four points surrounding the falcon.”

At the top of the broken seal were likely the Hebrew letters lamed, meaning belonging, and aleph, the first letter of Jezebel’s name.

Professor Meyer said: “The discovery of the personal seal of one of the greatest villains in the Bible once again strengthens confidence in the historical accuracy of the Biblical record.”

However, not all historians have been convinced by the discovery. According to Israeli paleographer Nahman Avigad, the inscriptions are “no basis for identifying the owner of our seal with this famous lady”.

But he did note it was indeed fit for a queen, stating in 1964 Jezebel was a rare Phoenician name.

Professor Meyer believes Jezebel was among the most wicked figures described in the Bible.

He said: “According to the Bible, while Jezebel was slaughtering YHWH’s prophets, a devout believer of YHWH named Obadiah was hiding many prophets in caves and supplying them with food and water.

“The most famous of her rivals was the famous prophet of YHWH, Elijah, whom Jezebel hunted in every surrounding kingdom and nation.

“In poetic justice, the bloodthirsty Jezebel died a horrific death by being thrown from a window at her winter capital of Jezreel where here blood was spattered on the wall and horses trampled her underfoot.

“Then to add insult to injury, and to fulfil a prophecy made by her rival, Elijah, wild dogs devoured Jezebel’s flesh leaving only her skull, her feet and her hands (2 Kings 9:30-37) to be buried.”