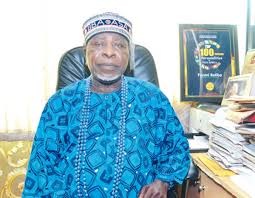 According to Wikipedia, Aliu was born at Oke-Imesi, a city in Ekiti State southwestern Nigeria. His father, Aliu Fakoya was an Ifa priest who hailed from Oke-Imesi but is mother hails from Iloro-Ekiti.

He began acting in 1959 when Akin Ogungbe, a Nigerian veteran dramatist visited his hometown, the same year he joined the Akin Ogungbe theatre group where he gained some experience in drama. In 1966, after he spent seven years with the Ogungbe troupe, he established “Jimoh Aliu Concert Party”, a group based in Ikare in Ondo State southwestern Nigeria.

He later joined the Nigerian Army in 1967 but retired in 1975 with the aim of focusing on drama as well as promoting independent artist under the platform of Jimoh Aliu cultural group. He had produced several television drama series such as Iku Jare Eda Yanpan yanrin and Fopomoyo that featured king Sunny Ade.

His other works include Ajalu, Arelu
Igbo Eleje and Irinkerindo amongst others.
Jimoh Ibrahim was once honoured with the national award of Member of the Federal Republic of Niger.