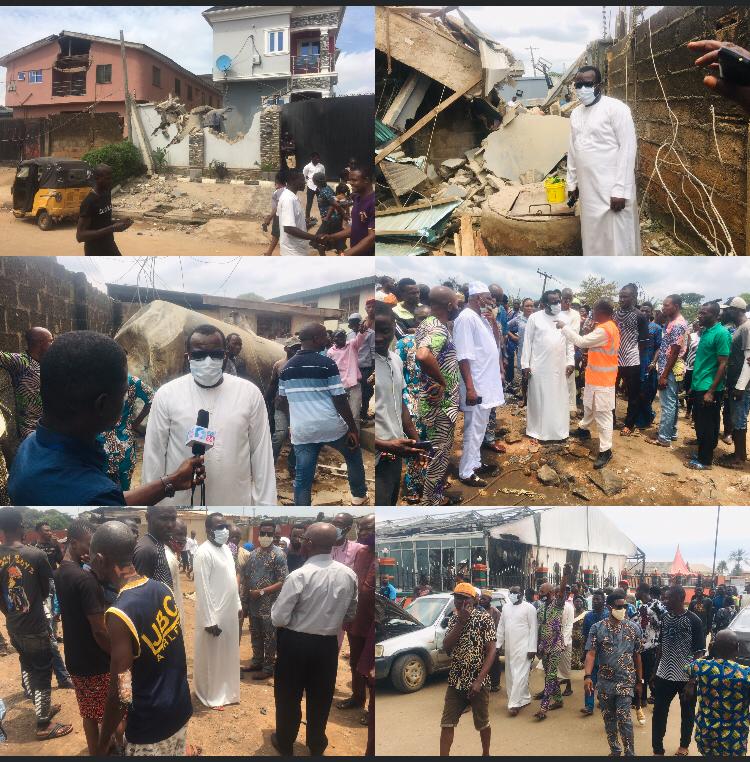 It is no longer a news that Iju, a suburb in Ifako-Ijaiye Local Government was rocked with an explosion arising from a fallen gas tanker, which shattered the whole area; destroying properties with several persons affected with different degree of fire burnt.

The explosion which occured yesterday, Thursday 25th September 2020 left an untold hardship on those whose properties and lives were directly and indirectly affected.

Hon Adewale Temitope being a responsive representative of the people visited the scene of the explosion this morning in company of the community leaders, NEMA officials and LNSC Officers, to assess the level of damage the explosion did to the Community. While addressing members of the press present at the scene, Hon Temitope strongly frowned at the siting of gas station in a densely populated residential areas questioning the approval of such by the authorities in charge. He added that, each local government council should be equiped with a fire service station to serve as a first responder in case of emergencies such as its witness in iju yesterday.

He also hinted the press on the Lagos State House of Assembly activities in total overhaul of the transport sector law of the state, which has already scaled the second reading stage and it’s being prepared for public …. The bill speaks about the movement and restriction of articulated vehicles within the state due to the increase in the accidents of trailers in the recent times. He said, government exist first, to protect the lives and property of the people they govern.

To this extent he said, as the representative of the people of the immediate community he will ensure the victims gets all neccesary support they require at this time, to alleviate their loss and takes care of their welfare.

Hon. Temitope also visited Ancilia Catholic Hospital in company of the council Chairman, Hon Oloruntoba Oke and some members of Ifako Ijaiye legislative council, Councillors Bisola and Ojugbele. The brief visit was to thank and appreciate the hospital management for their responsiveness to the incident yesterday and the medical care they gave to the people.

The visitation ended at Ifako Ijaiye General Hospital, where the victims of the explosion were been attended to. Hon Temitope commiserate with the victims and thank the medical personnels for the swift attention given to the people. While ensuring that the people receive the best of medical care they deserved, he also dole out thousands of cash to all the twenty six (26) individuas affected for their personal upkeep.

In his concluding remarks after the assessment visitation, he encouraged the people to always be alert and be vigilant while ensuring safety in all they do at all times.