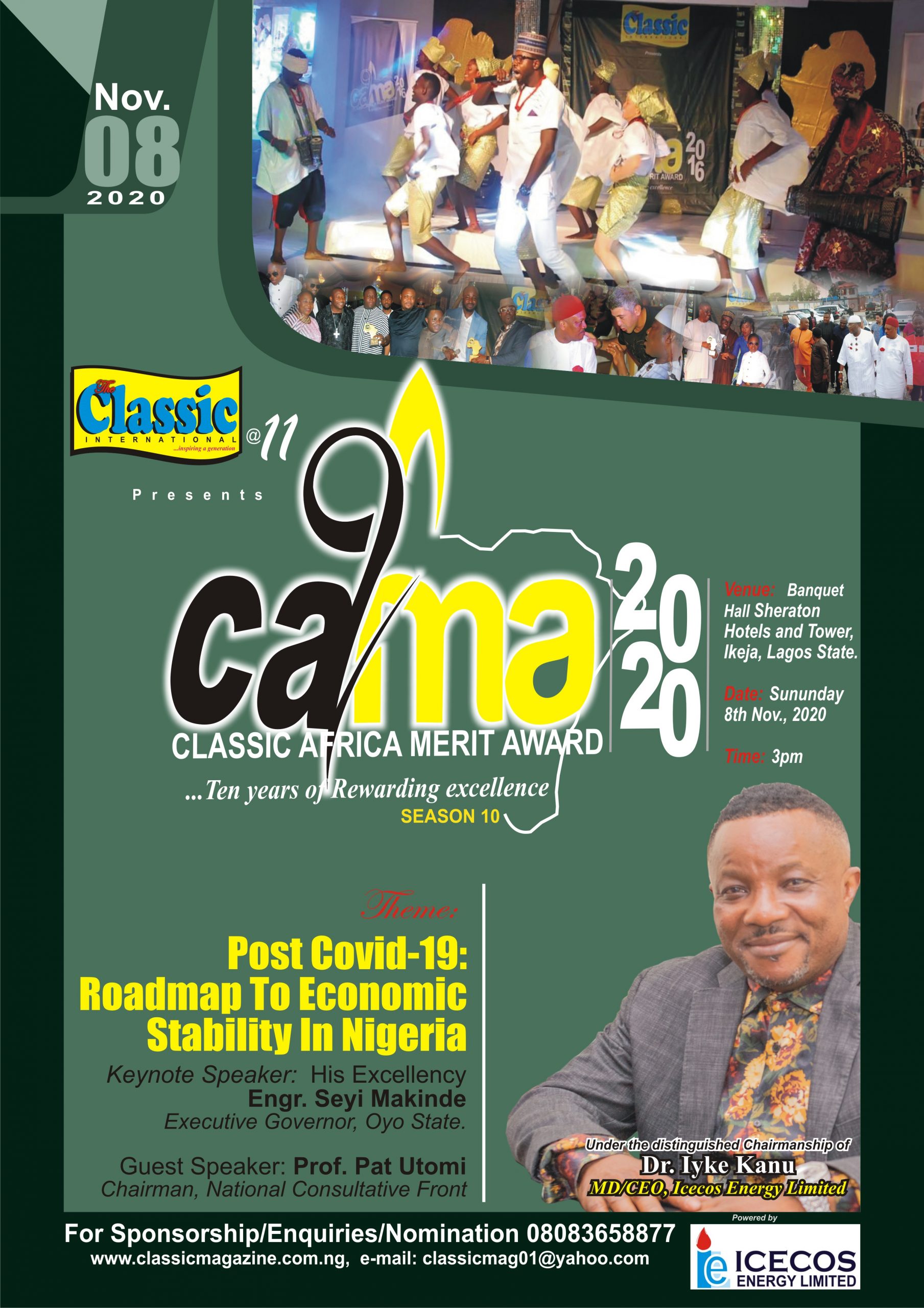 Come Sunday, November 8, 2020, all roads would lead to the prestigious Sheraton Hotel, Lagos for the 10th edition of Classic Africa Merit Award tagged CAMA 2020 to celebrate the 11th anniversary of Classic International Magazine.  The publisher of Classic International Magazine, Dave Agwazim inundated the media that the theme of this year’s event is is “Post COVID-19:  Roadmap to Economic and Political Stability in Nigeria”, the event under the chairmanship of Dr. Iyke Kanu promises to be an enthralling one with several prominent individuals expected to grace the occasion.The Executive Governor of Oyo State, Engr. Seyi Makinde and Prof. Pat Utomi, Chairman of National Consultative Front, NCFront, will deliver the keynote address while our Special Guest of Honour and Executive Governor of Zamfara State would be honoured as the Best Performing Governor on Security and Robust Community Engagement.Other very Special Guests to be expected includes the Deputy Senate President, Sen. Ovie Omo-Agege, Sen. Solomon Adeola and the Speaker of Lagos State House of Assembly, Rt. Hon. Mudashiru Obasa.The Liberian Honourary Consul to Nigeria, Chief (Mrs.) Opral Benson and Princess Toyin Kolade are the mothers of the day.Hilariously gifted comedian, Koffi Tha Guru and sultry Nollywood diva, Uche Elendu would be the comperes for the event.During the occasion, some notable Nigerians who have distinguished themselves with their contributions to the growth of the society would be celebrated and given awards in different categories.  Some of the awardees include Hon. (Engr.) Gbolahan Yishawu, member of the Lagos State House of Assembly representing ETI-OSA2, who has demonstrated remarkable leadership in his constituency and at the Assembly.  Others include Prince Harry Samuel, the Executive Chairman of Mushin Local Government Council, Hon. Emmanuel Olanrewaju Bamgboye and host of others.CAMA 2020 promises to be a mixture of interlectual brainstorming, appreciation of excellence service to the society and entertainment.As the day draws closer, CAMA 202 is fast becoming cynosure of all attention.CAMA 2020 is powered by highflying oil and gas conglomerate, Icecos Energy Limited and supported by other brands.