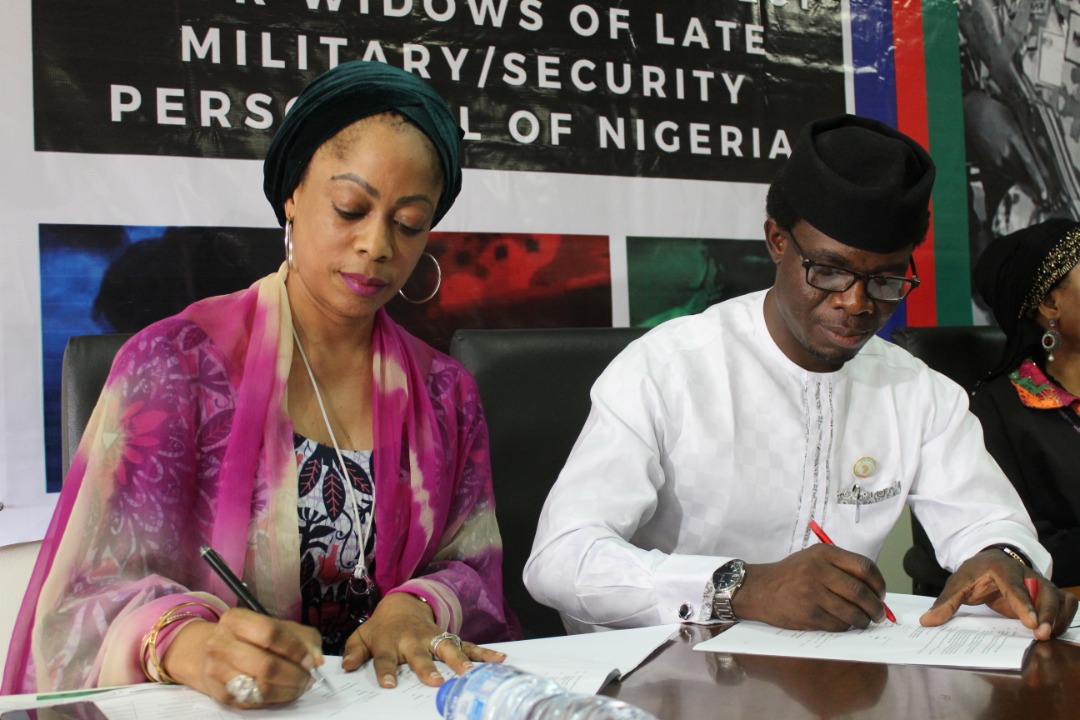 The Support Our Troops (SOT) Foundation founded by Mrs. Funmi Ogbue has set out plans to work with the African Union’s Economic, Social and Cultural Council (ECOSOCC) to bring a new lease of life in term of 600 housing units in Abuja to the widows of many Nigerian soldiers and security personnel who have lost their lives in many peacekeeping and territorial defence missions that the Nigerian Army has embarked on in recent years. This housing scheme is also coming at no cost to the widows and is expected to spread to every state of the federation.

This was disclosed during the official signing of Memorandum of Understanding (MOU) in Abuja tagged: ‘Social Housing Project for Widows of Late Military and Security Personnel in Nigeria’ monitored by Oki Samson of Trek Africa Newspaper between the Founder of Support Our Troops Foundation, Mrs. Funmi Ogbue and first Nigeria representative of the Permanent General Assembly of African Union’s ECOSOCC, Dr. Tunde Asawolu.

Speaking with Pressmen shortly after the signing, Mrs. Funmi Ogbue said that it is not easy for one person to do such a project alone hence the need for the partnership. ‘It is got to be a collaborative effort to deliver innovative solutions that will cater to the housing needs of fallen troops. Support Our Troops Foundation and the Africa Union Economic Social and Cultural Council (ECOSOCC) are joining forces to design, build and maintain a mass housing project for the widows of the members of the armed forces across the country in continuance of our mission to lift the spirit of the Nigerian troops and their families.’

‘It is very ambitious but God will give us the strength.
We want to do 600 units of affordable housing every two years in every state of the country. So, these estates will be in every single state by the time we are finished. The idea is to provide these houses free for widows, completely free starting from the FCT.’

On his part, Dr. Tunde Asawolu submitted that the gap between the demand and supply in the housing sector in Nigeria keep increasing as there are numerous challenges in the sector. He said: ‘It must be emphasized that land is available but houses are limited. It is also obvious that population has a role to play in housing surplus or deficit, likewise the economic conditions of the country. However, there are other contributory issues such as some people live alone or in small household, improper land utilization, building horizontally instead of vertically, etc.’

‘All these challenges make Nigeria to be characterized as one of the eight countries that needs sustainable and affordable houses in Africa’, he concluded.

When reached on the audacious move by SOT and ECOSOCC, Mrs. Mary Ettah, the Director-General of Women Development Center praised the tremendous initiative by the two organizations.

She noted: ‘Due to patriarchy, a woman’s social status is mostly associated to that of her husband. However, when the husband is no more, her situation is made worse in the society as they suffer both loss of social and economic status and they become homeless and more vulnerable.’

‘The Global Index Watch on Women indicates that widows undergo abject poverty and many of them are without skills that will empower them. They are very vulnerable to harmful traditional practices that mitigate against their human right, therefore, the need to tackle poverty among women especially widow through economic empowerment initiative and acquisition of necessary skill to make them self-reliant, give them a voice and raise their living standards in general.’