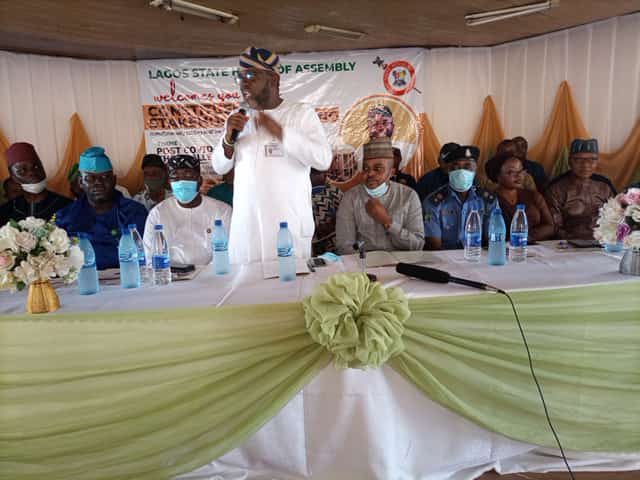 Hon. Temitope who hosted the members of the Constituency was elated and could not hide his joy of seeing such a magnitude of people turn out for the event.

In his opening remarks, he expressed his appreciation for the support he has been getting from the Constituency since his assumption to office. He went further to read his speech which captured the essence of the meeting which was tagged; Post Covid 19 Pandemic: Challenges and Prospects. He enumerated the challenges which was occasioned by the pandemic and the recent effects of the #ENDSARS protest which degenerated to an inter ethnic crisis particularly in ifako ijaiye local govt.
He added that, the essence of the Stakeholders meeting was to receive memorandum from the people which will form part of the budget provision for the coming year.

While speaking about his activities in the last one year, Hon. Adewale stated that, he would rather focus on what’s more to be done for the constituents than talking about his achievements. He used the opportunity to introduce the members of the recently constituted Committee for the Ten Million Naira (#10,000,000.00) relief fund set aside for the immediate rehabilitation of the ruins and losses that resulted from the crisis in Fagba.

The interactive session of the program witnessed requests from members of the Constituency, ranging from Infrastructure, Economic, Education, Finance and empowerment. Hon. Adewale gave response to all the questions asked, promising that he would ensure that the people gets the best out of the state government in terms of development and improvement in the welfare of the Constituency.

Several other dignitaries were present which include the APC LGA Chairman Dcn. Omole who led the LG Exco and the ward Chairmen, CDC Chairman, Pastor Opajobi, Hon. Akin Fadayomi, Hon. Aremo Kayode and many others.

The National chairman of NASME, Sir Aromadegun Agboade also enlightened all about the provisions available through the platform and encouraged youths to take advantage by participating in the scheme.

Hon. Adedeji Temitope Adewale also gave out palliatives of food stuffs to the people while the votes of thanks was offered by the chief of staff to the LAHA Speaker, Hon. Dayo Saka Fafunmi.