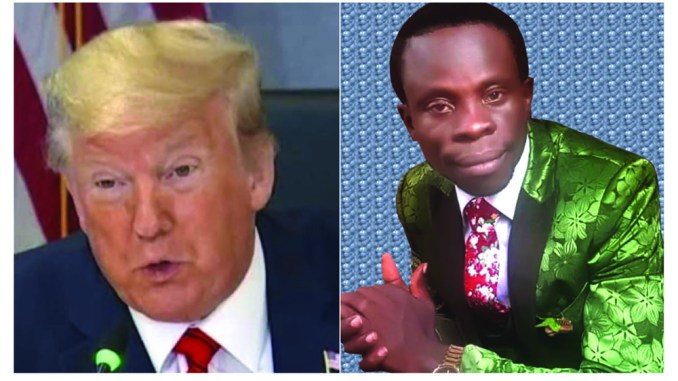 Abuja based Ghanaian man of God and the General overseer of Authority Arena church,Mpape Abuja Nigeria, Prophet Boateng Bempah has given his words to the upcoming America Presidential election 2020, saying,God revealed to him that the incumbent President, Donald trump will be re-elected for another four years tenure.

Speaking with some selected media personality at International Headquarters of his church in Abuja, the man of God Revealed that Donald Trump is God ordain candidate for the election despite all odds by the opposition, president Trump will win the election, he explained that President Trump believes in God and has been listening to God directives throughout his first tenure and because God has not finish with what he wanted to do in America, Donald Trump will comeback to put finish torch to some of the major policy of that God owns country, the Man of God said God loves America so much,, and Donated Trump is a true Christian, who fears God and worship him in truth and in spirit.

Prophet BEMBAH said with the kind of change Donald Trump has brought to America, God has chosen him again to complete the good job he started four year ago

It will be recalled that Prophet boateng Bempah is one of the few men of God we have in Africa with Accurate Prophecy,