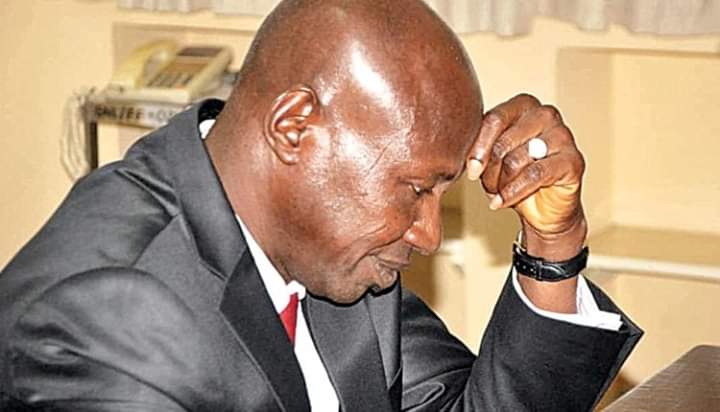 . May be prosecuted over disappearance of three private jets seized from Diezani’s associate

There are more troubles ahead for the suspended Acting Chairman of the Economic and Financial Crimes Commission, Ibrahim Magu, as strong indications have emerged that President Muhammadu Buhari may order his arrest and prosecution soon.

This is coming on the heels of the submission of the final report by the panel to the President last Friday.

Newsreel gathered from impeccable Presidency sources that following the unearthing of more damning evidence of corruption against Magu during his recent probe by the Justice Ayo Salami-led Judicial Commission of Inquiry, which are also chronicled in the panel’s report already submitted to Buhari, ordering the arrest and prosecution of the embattled anti-graft Czar has become compelling.

It was also learnt that Magu may be eased out of the Nigeria Police Force soon.

The Salami-led probe panel submitted its report to President Buhari last Friday in which it recommended Magu’s sack as EFCC acting chairman.

The panel, in the summary of its report submitted to Buhari, also advised the President to appoint a new EFCC chairman in an interim position for two years.

In the copy of the report obtained by Newsreel the panel also asked President Buhari to appoint the next EFCC chairman from outside the police force.

Receiving the Salami probe panel’s report, President Buhari had vowed that his administration was ready to tackle corruption headlong with a view to eradicating the social malaise in the country.

He said the war against corruption should be fought without fear or favour, adding that no individual is bigger than the country.

The President also said he took the decision to probe Magu because of “serious allegations” levelled against the anti-graft agency under his watch.

The Salami panel, after several months of investigation, recommended further probe of the mindboggling discoveries and evidence against Magu, recommending his prosecution in a competent court of law.

With the impending arrest of the embattled EFCC acting chairman, Magu is expected to provide answers to some new discoveries by the Salami panel during his recent probe.

One of such issues, impeccable Presidency sources hinted Newsreel, is that of the mysterious disappearance of the three private jets seized by the EFCC from Kola Aluko, a business partner of the former Petroleum Minister, Diezani Allison-Madueke, which were kept in the custody of the anti-graft agency under Magu.

It was learnt that there are fears in the Presidency that the three private jets may have been returned to the owner through the backdoor as their whereabouts have remained unknown.

Newsreel gathered that when invited by the panel, EFCC officials who took part in the investigation of Aluko, the fugitive former minister’s business associate, said Magu was in the best position to provide answers on the matter.

But Magu, when summoned, was said to have stunned the Salami panel when he told them he knew nothing about Aluko’s investigation and could not remember what had happened to the three seized jets.

When probed further, Magu claimed that the three seized private jets may have been released through a court order. But he could not produce the order before the panel.

Rather, it was the court orders for Aluko’s seized properties in the United States and Abuja that Magu presented to the panel.

In EFCC file, it was gathered, it was stated that the embattled EFCC chairman allocated the house for temporary use as an isolation centre following the outbreak of the COVID-19 pandemic.

But the Salami panel was stunned to discover during its visit to inspect the building that property had been converted by yet to be identified persons. The panel members were confronted with the sight of permanent structures being erected on the property during their visit.

When questioned by the panel, Magu, it was learnt, could not provide any reasonable defence as to the true position of the property and the identity of its latest occupants.

As to whether he has the authority to unilaterally order the allocation of a seized property, Magu claimed he wrote the President and he was granted the permission to take action.

However, he could not provide any of such authorisation letters from the President – both the one he claimed to have written to the President and the one giving him the approval and directing him to issue such allocation.

Newsreel further learnt that Magu is also to answer questions on the whereabouts of some agency’s monies kept illegally by his directive.

Usually, agencies and parastatals are mandated to, by the end of December of every year, return the balance of unspent money in their coffers to the Federal treasury.

But under Magu’s watch in December 2019, it was learnt, two tranches of unspent funds belonging to the EFCC disappeared from the anti-graft agency’s main accounts.

After a painstaking investigation, the office of the Accountant General of the Federation intercepted the funds now found in the EFCC Staff Cooperative Society account, where they were warehoused waiting for their final destination.

The Justice Salami panel, after its inauguration, beamed its searchlight on the alleged fraud at the EFCC and initiated further investigations towards unravelling those behind the alleged heist.

Interestingly, in September, while the panel was opening its investigations, 1stnewsonline.com learnt, it discovered that the sum of N50million was moved from the agency’s Cooperative Society’s account to the EFCC’s main account.

But the balance and the other tranche were not moved as they remained warehoused.

Also, it was gathered that Magu will be answering questions on the flagrant disregard for court orders by the EFCC under his watch.

The Salami panel had in its report revealed how EFCC disobeyed court orders with reckless abandon. Several of such cases were brought up before the panel, including the ones affecting the agency’s staff.

In about five instances where the staff were sacked or dismissed against laid down regulations, the panel was faced with fragrant disobedience of court orders directing their reinstatement.

The present acting Chairman of the EFCC, Mohammed Umar, upon appeal from the panel, had to obey the court orders by reinstating the affected staff.

Also, contrary to the claims in some quarters that police have been barred from leading the agency, it was discovered that what the panel has recommended is that contents of the Acts setting up the anti-graft agency should be strictly adhered to.

The panel recommended that the withdrawal of police personnel, who are on secondment to the agency, should be in phases over the next two years.

It also recommended that the main staff of the agency be encouraged to take over the administration of the EFCC as some of them had received the best training within and outside Nigeria.

The Salami panel also recommended that police officers on secondment who intend to become the agency’s full staff should be encouraged to do so after going through the regular process of interviews as stipulated in the regulations guiding the administration of the EFCC.

This is to enable them to disengage fully from the police. Force.

The panel, which also recommended the appointment of an acting chairman in acting capacity for two years, noted that the Act establishing EFCC clearly spells out those qualified to head the commission outside the Nigeria Police Force.