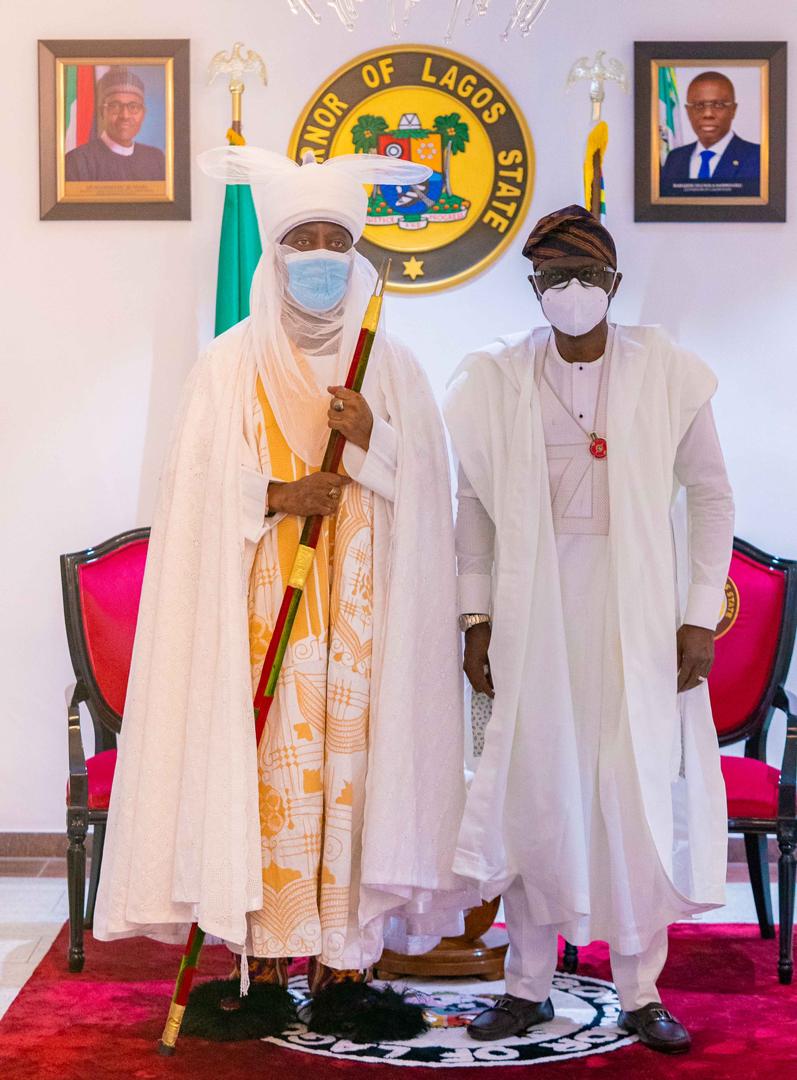 There seems to be no depletion in the roll call of well-meaning personalities identifying with Lagos State Government over the destruction of public and private assets in the carnage sparked by the hijack of the recent EndSARS protests.

Emir of Kano, Alhaji Aminu Ado Bayero, on Sunday, led all the traditional councillors in the ancient kingdom on a commiseration visit to Governor Babajide Sanwo-Olu, at the State House, Marina.

The Emir and his entourage were personally received by the Governor in company of the top officials of the State, including the Secretary to the State Government, Mrs. Folashade Jaji, Chief of Staff to the Governor, Mr. Tayo Ayinde, Commissioner for Local Government and Chieftaincy Affairs, Dr.Wale Ahmed, and Commissioner for Waterfront, Arc. Kabiru Ahmed, among others.

The Governor’s meeting with the Emir was, however, held behind closed doors.

After the meeting, Bayero briefed reporters on his mission to the State House, sympathising with residents of Lagos over the coordinated destruction, which he described as “mindless”.

The monarch said Kano felt the irregular pulse experienced by Lagos in the wake of the violence, noting that his visit to physically sympathise with the Governor was compelled by the shared history of both States in commerce and royalty.

He said: “I am here in Lagos to sympathise with the Governor and the Oba of Lagos, who happens to be a father to me. We bring them the goodwill of the Government and people of Kano State. We thought it necessary to come and greet Lagos people over the crisis of the few weeks ago and sympathise with everyone affected.

“The long relationship between Lagos and Kano cannot be over-emphasised. Whatever happens to Lagos is happening to Kano. I have just met with the Governor; I met with Oba of Lagos yesterday (Saturday) and we had fruitful discussion, which could lead to further good relationship that has been existing for centuries between Kano and Lagos.”

The Emir said part of the reasons for his visit was also to strengthen the relationship of the Kano Emirate with the traditional institution in the Southwest, noting that he had held meetings with traditional rulers in Abeokuta, Ibadan, Oyo and Ile Ife in the course of his trip.

Bayero called for unity and urged the youths to give peace a chance. He said violence would bring no benefit to anyone, as he urged the political class to hasten its response to issues that led to the protests.

Gov. Sanwo-Olu expressed his appreciation to the Emir for the visit, which he described as “historic”.

“We are grateful for this historic visit and the goodwill message sent to us by the people of Kano. The relationship between Lagos and Kano has come a long way. We will continue to protect the common interests to strengthen this bond,” the Governor said.