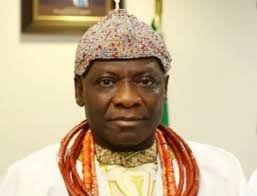 The Olu of Warri, Ikenwoli Godfrey Emiko has been confirmed dead by complications associated with Coronavirus.

Newsreel reliable gathered that he died yesterday barely a week after his fifth coronation anniversary.

He was said to have come in contact with the late Major General John Irefin, who died earlier this month from COVID-19 complications.

He succeeded his younger brother Olu Atuwatse II who died in March 2015. kenwoli Godfrey Emiko was crowned Ogiame Ikenwoli on the 12th of December 2015 at Ode-Itsekiri, the ancestral home of the Itsekiri people in a ceremony which was witnessed by many dignitaries in Nigeria.

Meanwhile, official statement of his death will soon be made by the Ologbosere of Warri, Chief Emami Ayiri, who, as the traditional Prime Minister of the town, is empowered to break the news of the monarch’s death.