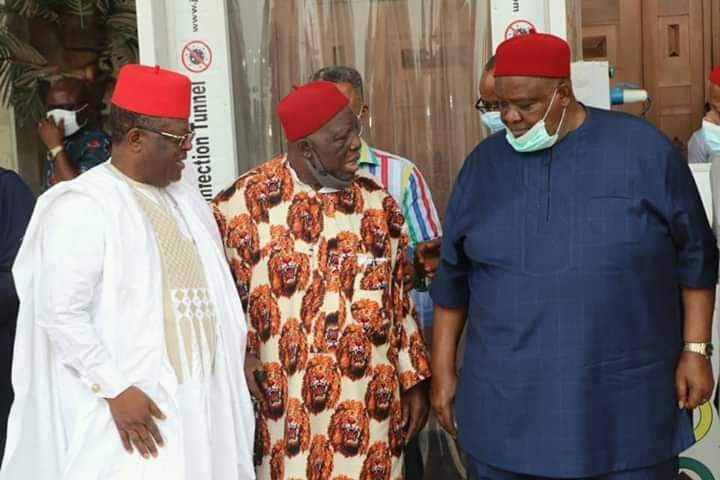 The foremost Igbo leader, Chief Emmanuel Iwuanyanwu has commended Governor David Umahi of Ebonyi State who is also the Chairman South East Governors’ Forum for his efforts at ensuring the peace and unity of the Igbo nation.

Chief Iwuanyanwu made the observation when he led a strong contender for the President General of Ohaneze Ndigbo, Professor George Obiozor on a consultation visit to Governor Umahi at his Uburu country home.

Chief Iwuanyanwu while appreciating Governor Umahi for the massive renewal of the Abakaliki Capital City and environs solicited the support of Ebonyi State to the candidature of Professor Obiozor whom he described as best suited for the job among his challengers.

“After rigorous evaluation, we have discovered that Professor Obiozor’s qualification and pedigree is quite appealing and we are convinced that he is the right person we can give to the South East Governors’ Forum and Ndigbo and we will not be disappointed, he is a very sound person, he has served Nigeria in so many capacities and he is the choice of Imo people”

The top contender, Professor George Obiozor who described Governor David Umahi as the best and brightest in the region, thanked the Ohaneze Ndigbo Imo State Chapter for choosing him as their consensus candidate and pledged to live up to expectations.

“Governor Umahi is one of our best and brightest. He is the Governor of Governors, you are an example of Igbo exceptionalism, Igbo capacity of turning difficult things into something that proved to be dividends and opportunities, I thank you, I also thank Imo Ohaneze for choosing me as their consensus candidate, Igbos today are in a difficult situation and we need maturity to solve those problems, my aim is to assemble the Igbos, all we need is to create a common course, by coming to Ebonyi State today, we know that our future is bright and that is the options for the Igbos, by the grace of God, I will never disappoint you”

He cautioned people of South East against unguarded utterances that are capable of igniting hostilities among brothers and other regions in the Country.

“I believe that opposition strengths our position but we can’t discuss the security of South East on the pages of newspapers, after all, we are still the safest in the country, we need a revolution in character and content, we need it, Igbos were originally know for character “
Governor Umahi while debunking the allegations that President Buhari hates the Igbos insisted that the Igbos especially Ebonyi State never had it so good as under President Buhari.

“Buhari is not against the Igbo man, it is at his time that Ebonyi State is seeing development, it is from his efforts that we are building the International Airport, the Ultra-modern Teaching Hospital and he even gave us over 3 billion naira to build the Cancer Centre in that hospital, etc, so he doesn’t hate the Igbos”
The Governor while calling on Chief Iwuanyanwu not to relent in the task of rebuilding the Southeast through unity declared his support and that of Ebonyi people to the election of Professor George Obiozor as President General of Ohaneze Ndigbo come January 10th, 2021.

“I will stand with Ambassador Obiozor, we want character for the Igbo people, I love anyone that loves an Igbo man.”
He tasked Professor Obiozor to regenerate Igbo unity when he emerges as the President General.

Chief Emmanuel Iwuanyanwu, Chairman of Champions Newspapers was joined on the visit by notable personalities including retired Inspector General of Police, Mike Okiro and many others.