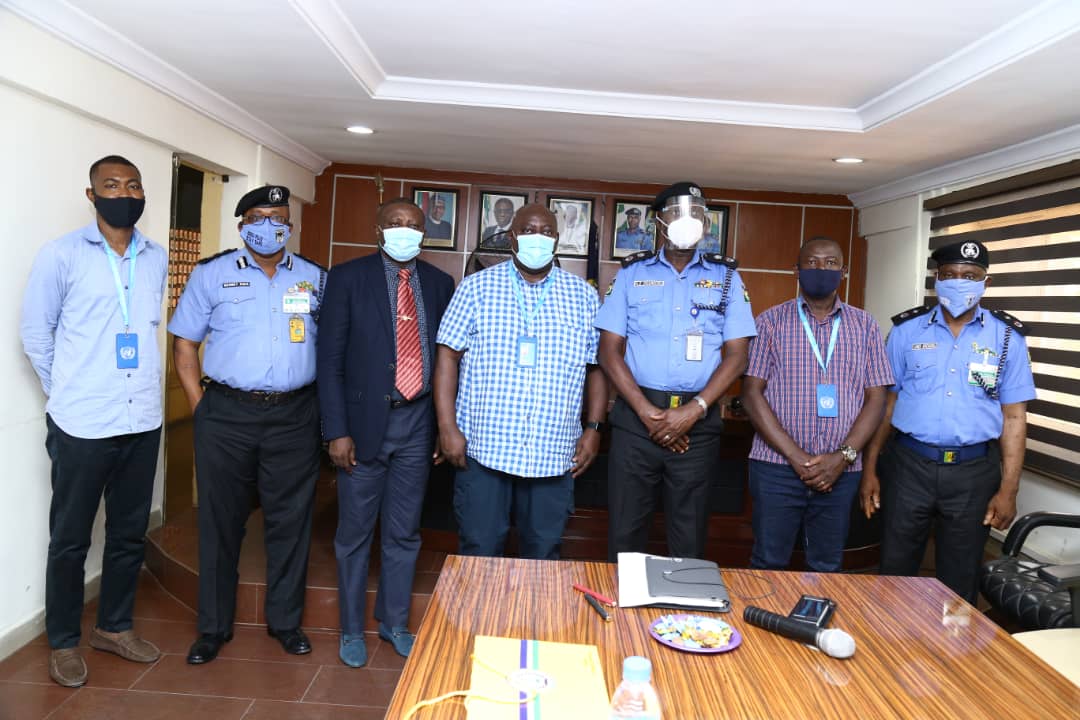 The Commissioner of Police, Lagos State, CP Hakeem Odumosu today Wednesday 20th January, 2021, received a delegation from the United Nations Department of Safety and Security on courtesy visit in his ikeja office.

The Commissioner of Police, assisted by his management team, deliberated on germane security issues in Lagos State and possible way forward. He appealed to the delegation to assist the command in many areas to improving Standard Operating Prosecure of the command for better service delivery.

In his response, the head of the delegation, Mr Chiza Nkhowawi, Chief of Security, Information and Operation Center UNDSS, commended the Commissioner of Police and his team for their relentless efforts in policing Lagos State despite its size, demographic and geographical nature. Mr Chiza Nkhowawi, who was accompanied by Mr Mohammed Brima, Security Information Analyst UNDSS and John Adefoye, Local Security Associate UNDSS, therefore promised to partner with the command in many areas especially on training and retraining, sharing of information and capacity building.

In another development, the Commissioner of Police, Lagos State, CP Hakeem Odumosu today addressed officers and men of the Rapid Response Squad (RRS) of the command on the need to sanitise and restructure the squad, which is regarded as the biting teeth of the Lagos State Police Command, for better service delivery and efficiency.

The briefing was at the heels of the Commissioner’s of Police plans to reposition sections, units and squads of the command to be more effective and productive with a view to discharging Police duties as expected and required.

The Commissioner of Police, while commending the officers and men of RRS for their commitment to duties and quick response to distress calls from the general public, encouraged the personnel of the RRS to improve on their services as such have paid off and being appreciated by the government and good people of Lagos State. He further assured them that the Governor of Lagos, Mr Babajide Sanwoolu, will do the needful to re-fertalise the squad to regain its lost glory.

CP Hakeem Odumosu also critically addressed the issue of welfare of the personnel in order to boost their morale to perform their duties even beyond expectation.

In his bid to actualise his strategic plans, he ordered the Deputy Commissioner of Police in charge of Operations, DCP Ahmed Kontangora, to inject fresh blood and agile men into the squad while those who have spent more than five (5) years in the squad be redeployed to other formations as such changes are imperative.

The police boss, who was accompanied to the RRS parade ground, Alausa, by the Deputy Commissioner of Police, Department of Operations, DCP Ahmed Kontangora, Assistant Commissioner of Police, ACP Jide Agboola, ACP Dotun Odubona, AC Operations, Lagos State, CSP Muyiwa Adejobi, PPRO Lagos, and CSP Shittu Aka, CSP Operations, Lagos, admonished them to be focused and resolute in fighting crimes and criminality in the state. CP Hakeem Odumosu also reiterated his zero tolerance for crimes and social vices in all ramifications in Lagos State.