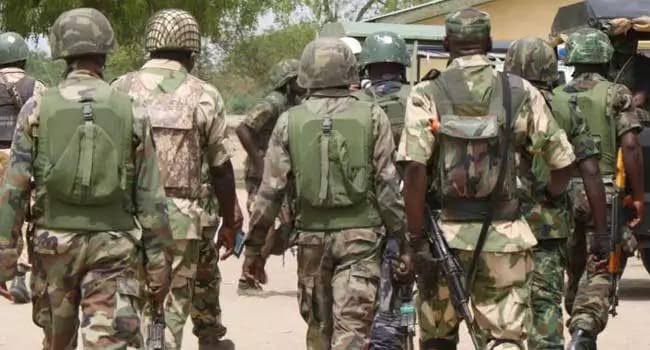 One of the young women abducted from Obigbo (Oyibgo), Rivers State, during the recent military operation has been raped to death at Mogadishu Barracks in the Federal Capital Territory (FCT), the International Society for Civil Liberties & Rule of Law (Intersociety) alleged in a statement issued today, Sunday, February 14, 2021, in Onitsha, Eastern Nigeria. It gave the name of the lady as Victoria.

The statement further alleged that the rapists also deflowered and inflicted “bruises and internal injuries on another, as young as 23, who resisted being raped because she was a virgin.”

Intersociety claimed that in all “53 Obigbo young women were abducted & serially raped at Mogadishu Barracks”.

“The 53 young girls and women and others in non-menopausal age bracket, were abducted by the Nigerian Army in Obigbo, Rivers State between Oct and Nov 2020 and serially raped for weeks by its soldiers at the Mogadishu (Abacha) Barracks in Abuja. They were part of those abducted at various arenas at Obigbo on their way home from work between 7pm and 7.30pm on 20th Nov 2020 and taken to Obinze Army Barracks in Owerri in the dead of the night or hours of the blue law from where they were secretly transported next night to the Mogadishu Barracks, Abuja where many, if not most of them were raped and used as ‘sex slaves’ for weeks before they were secretly transferred to DSS dungeons in Abuja where they are presently held incommunicado,” Intersociety said in the statement signed by Board Chair Emeka Umeagbalasi; Head of Civil Liberties & Rule of Law, Barrister Obianuju Igboeli; Head of Democracy & Good Governance, Barrister Chinwe Umeche; Head of Campaign & Publicity, Barrister Chidinma Udegbunam; Head of Int’l Justice & Human Rights, Barrister Ndidiamaka Bernard; and Head of Field Data Collection & Documentation, Comrade Samuel Kamanyaoku.

On how it discovered the ordeal of the allegedly raped abductees, the rights group said:

“Following the release of the second batch of the Obigbo abductees numbering 29 on 29th Dec 2020 including two young women (23 years old and 21 years old); a case of rape by soldiers of the Nigerian Army attached to Mogadishu Barracks and similar harassments at Obinze Army Barracks in Owerri, Imo State was reported and on 8th Feb 2021, Intersociety dispatched its investigators to interview the victims. Intersociety is retaining its right of confidentiality by withholding the identities and full accounts of the two rape victims. However, part of their accounts relevant to this statement is that “they were abducted alongside multiple dozens of other young women and men between 7pm and 7.30pm on 20th Nov 2020 at Obigbo”. The victims were abducted on their way home from their job or work places. The two rape victims were specifically abducted and labeled “criminals” on their way home from their hair dressing salon shops and at a local commuter bus stop. Their abductors (soldiers) operated with a luxurious bus “packed” with multiple dozens of abductees. They were taken away to undisclosed locations same night only for them to find themselves next day (21st Nov 2020) at Obinze Army Barracks, Owerri (Imo State). In the late evening of same (21st Nov), they were again taken away in the same luxurious bus only for them to find themselves next morning at Mogadishu Barracks, Abuja.

“At arrival in the Mogadishu Barracks, they were separated and dumped in ‘male and female guardrooms’. The victims also importantly informed Intersociety“that there were over 50 young women in the female guardrooms-all Obigbo abductees” and that “during their stay in the guardrooms and less than two days after their arrival, soldiers turned them into ‘sex slaves’ and serially raped them using “random picking or selection”. The victims added that “just a day after their arrival from Obinze on 22nd Nov, 2020, one of them, called ‘Victoria’ was raped to death and her corpse disappeared till date.” The victims told Intersociety that “they were not raped inside guardrooms but were randomly picked each of the raping days and taken to designated spots where they were raped and returned to guardrooms”. The victims also alleged that “they were tortured, abused, degraded and starved of food and toiletries while in the Army captivity and were also totally blocked from their families and stripped of their personal belongings including cash sums, bags, jewelries and mobile phones”. Intersociety,Barr E.R. Okoroafor and others have since sent the clips of the interview to strategic groups including notable women’s rights groups outside the country.”

Intersociety disclosed in the statement that efforts are being made to secure the release of the victims from army and DSS custody.