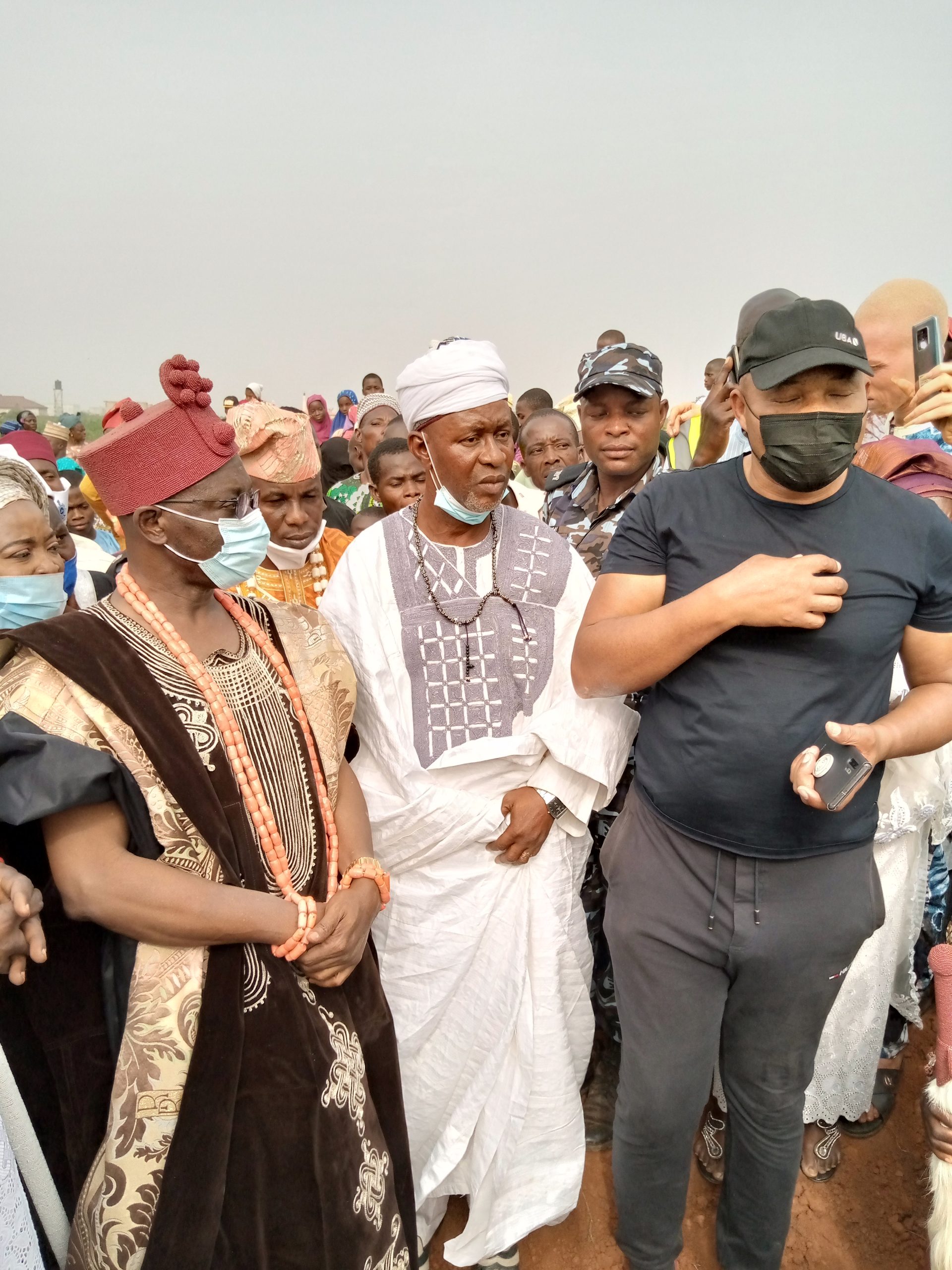 Q. WHAT IS YOUR REACTION TO THE LAUNCHING OF THE PALACE OF OLOFIN ADIMILUA, ADO ODO, Oba Dr. Abdul-Lateef Adeniran Akanni ?

Let me correct this impression, it is not launching of the Oba’s Palace that we are doing here but it is the personal residential of kabiyesi. We have our own central Palace. Mind you, the Kabiyesi has been out of town for awhile and he is coming back home. And in preparation for his home coming, that is why we are laying the foundation of his personal residence. In a couple of months, we are going to have a luncheon for the renovation of the Town’s palace soon. So, the erroneous impression we are hearing is that he is using his influence to solicit for funds and that he wants to move the palace to another location. However, the history of the town does not really permit that. Ideally, the town is an ancient town at the same level in the likes of Ilaro, Abeokuta and others. Because of development and prior to 1976, when Lagos-Badagry Expressway was constructed, anywhere you are in Nigeria, you want to go to Badagry, this is the only road. This was the first federal road from Lagos to Badagry. It was after the construction of Lagos-Badagry Expressway and that was one of the major challenges that we have, development now shifted to the other areas. But, historically we have had over 50 Obas in this town. And this is the only town in Egbado and Awori enclave, Ogun State that was never conquered during the Yoruba inter-tribal wars; the war between Yoruba and Dahomey. So, it is an ancient town with over 25 deities. You can see for yourself that few ones came. So, we want to bring that glory back to the town. Besides, you must have heard about the crisis we have that led to the relocation of the Oba to Abeokuta. And during that fracas the palace got burnt. And that is why Kabiyesi while coming back home, we want him to come to his own personal residence for us to prepare the renovation of the ancient palace.

Q. Can you tell us the peace moves or the reconciliation that has gone down before you think about this project?

There is one illustrious son of the town, named Nasir Rahmon Olanrewaju, he has been very tremendous in the bid for peace to reign in the town. And one of the outcomes of those meetings is what we have today, to bring back all the aggrieved parties to be on the same page so that the town can move forward. That effort (it) has gulped so much of our resources, time and effort and we thank God today and as you can see that peace is gradually returning to the town.

Q. Sir this project is capital intensive. Are you working with the State Government?

No, we wrote to both the State and local governments, who have shown interest in assisting the Oba, and especially the traditional council of Yewa and Aworilands. In the Yewa enclave, the Olofin Ado Odo used to be the paramount ruler until we have our crisis. He has a lot of respects among them. They are the one that spearheaded a committee among themselves to raise fund for it. And Oba is not a businessman, so, he has to leverage on individuals and others in the town. So, this is just a committee that consists of the government agents; local government, state government, traditional councils and the illustrious sons of the town. So, we are putting our resources together to give the kabiyesi a befitting residence. We want to share that again to give the town a befitting palace, that will bring back the lost glory of the town.

Q. APART FROM THE RESIDENCE AND THE PALACE, WHAT AREA OF CONTRIBUTION DO YOU THINK THAT THIS COMMITTEE CAN EXTEND THEIR HANDS ON TO TOUCH THE ORDINARY LIFE OF THIS KINGDOM?

If you know the history of this area because of our proximity to the Nigeria-Benin border, in the past, majority of our people venture into smuggling. Now, what we want to do is to raise awareness and increase the education level of our youth so that they can be gainfully employed elsewhere. So, there is a lot of empowerment programmes that the committee is looking into. We are going to schools, both primary and secondary to sensitise them on how and why they should go into education.

Q. WHAT IS THE ECONOMIC BASE OF THIS KINGDOM?

It is agriculture. Our land is table land. Almost 60 percent of the land is acquired by the State government through Agriculture. We have a resettlement farm on your way to Owode in the 60’s. It is being there, because infrastructure such as electricity and other social amenities have not been spread to those area, it becomes so difficult for them to raise agro-industry. Even the deplorable state of our road is worse. Badagry is not more less than 20 minutes to us. Ditto Owode 15 minutes, Ota and Agbara about 30 minutes. And so, we have arable lands. That is only area we can develop and they can assist us in the livelihood option.

Q. ARE YOU HAVING PROBLEMS WITH THE HERDERS; THE ISSUE FARMERS/ HERDERS CLASH THAT IS AFFECTING DEVELOPMENT OF AGRICULTURE?

Not really here. Even, the Fulanis community contributed to this programme in their own little way. We have cordial relationship. And this is because most of the lands are government owned lands. Individuals land, no. At times, they enter into private lands and we are able to resolve it amicably. That is why we don’t have rampant incidence or clashes between the community and herdsmen unlike we have in other communities.

Q. LET US GO BACK TO THE LAUNCHING; WE COULD NOT SEE ANY PRESENCE OF EITHER THE STATE OR THE LOCAL GOVERNMENT REPRESENTATIVES AT THE LAUNCHING?

Yes. One of our sons, who is the secretary to the local government is here with us. And according to him, government won’t announce their donation publicly. They have a package towards this event. The State government, I cannot say what is specifically going to be their own donation. You can see one of our sons, who is a member of Federal Character Commission, Hon. Isiaq Akinlade, is here and announced his own donation. His father is from this town. In a way, we have not seen the State presence, at least the Local Government is here.

Q. HOW CAN YOU APPROACH THE STATE GOVERNMENT ON THE DEVELOPMENT OF THIS TOWN?

Like the Oba said in his speech, in recent time, the road to Atan from Ado has been approved. The one from Ado to Ikoja has also been approved. We are waiting for the coming of the contractor to start the road. If that can be done, the town will be opened to the markets for the produce by the farmers. That is what we want. If that is done , other things will follow.