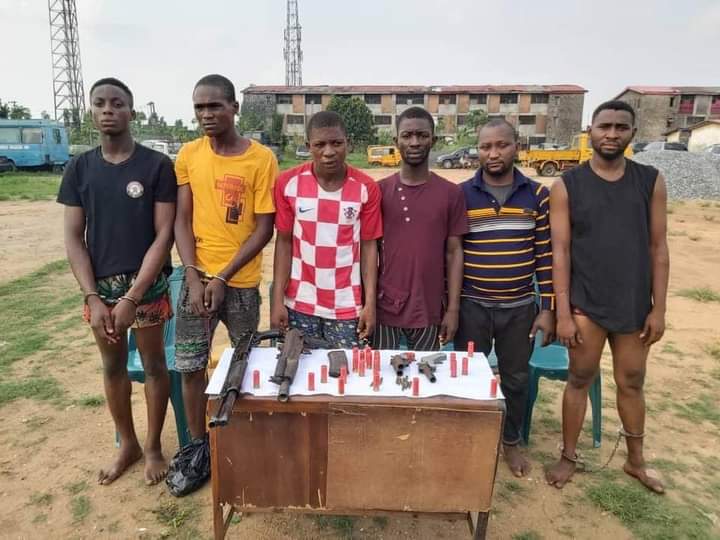 Seven members of a notorious armed robbery and kidnapping gang which specialized in robbing and killing Point of Sale, POS, operators, in Aba Town, Abia State, have been arrested by operatives of the Force Intelligence Response Team, IRT led by DCP Abba Kyari in Abia State.

Vanguard gathered that the suspects who were identified as Basil Macdonald, Emeka Uche, Godwin Rafael, Uzoma Samuel, Sunday Chibuike, Godwin Kalu and Abraham Thompson, were arrested recently after operatives of the IRT who were deployed to Abia State to checkmate activities of criminals in the state, trailed and apprehended them at their various hideouts.

It was gathered that the suspects who operated on a tricycle, killed three of their victims in three separate operations.

It was learned that the gang had on November 1, 2020, kidnapped a 59-year-old man, Achinulo Ignatius, at the Osisioma junction, along Enugu-Port Harcourt Expressway and killed the victim after collecting a ransom of N2.5 million from his relatives.

Activities of these criminals were said to have thrown POS operators and business owners in Aba town into a state of fear, forcing POS operators to withdraw their services as they have become soft targets for criminals operating in the state.

A save-our-soul message was then sent to the Abia State Governor, Okezie Ikpeazu, who swiftly summoned a security meeting, where he urged traditional rulers, vigilante groups, tricycle and POS operators to work closely with security agents in the state and supply them with information that would bring an end to the activities of the gang.

The governor was also said to have offered a reward of N2million to anyone who could provide information that would lead to the arrest of members of the gang.

Consequently, operatives of the IRT, who were already deployed in Abia State to combat violent crimes, contacted their informants operating within criminal world in the state who generated credible intelligence which aided in the arrest of a key member of the gang, Godwin Rafael, a native of Kogi State, who was said to have been the person who fired the shot that killed Dr Chimaobi, one of the POS operators.

Sources disclosed that Rafael was arrested while he was about fleeing Abia State and during his interrogation, he confessed to being a member of the gang which carried out the POS robberies, killings and kidnappings within Aba town.

He also disclosed that members of the gang were all recruited from the Vikings confraternity also known as Arobaga.

He said they took advantage of the End-Sars protest in setting up their gang with the hope that there would be no police to hunt them down.

After his arrest, 32-year-old Rafael led the IRT operatives in arresting six members of his gang. In his interview with Vanguard, he narrated how he joined the gang and the operations he took part in.

“I am an interior decorator residing at Orgbo Hill in Aba. I am married with two kids. I have just secondary school education. I was arrested in connection with armed robbery and murder.

“My journey into crime began when one of my friends; CJ got me initiated into the Vikings confraternity. After I joined the confraternity, I became friends to Henderson, Uloma and Handsome, who were also members of the Vikings but were into armed robbery and kidnapping.

“Henderson was always having money on him and whenever I was broke I usually went to him for support and on one of such occasions he asked me to join his gang, and I accepted.

“In the first operation that I went with him, in August 2020, he was arrested but I escaped to Imo State. Henderson was charged to court and remanded in prison.

“I was in Imo State when the End-SARS protest started and I returned to Aba confidently when it ended because I knew that the police wouldn’t be looking for me again.

“I then teamed up with Henderson’s other men and we robbed a POS operator at Umugasi, in Union Back area where we collected the sum of N52,000 from the operator and the POS machine.

“Three of us went for that operation and we used a tricycle and locally made guns. I got N20,000 as my share. The second operation was at Market road by Kents in Aba, we robbed a POS operator, a man, who pushed my gang member, Chibuike Sunday and I shot the man on his cheek and he died on the spot.

“I got N7000 as my share in that operation because we were five that went for it. But when I heard that the man was dead I went to drop the money at a junction where I said a prayer of forgiveness begging God that I didn’t know that the operation would take his life. I dropped the money hoping that it would serve as an atonement for my sins.

“Then, I made a vow never to go for robbery again. Few weeks later my gang members and I went to visit a friend along Ukgwu street in Ogbor hill, then one of our friends known as Santiago suggested that we should rob a POS woman who was on that same Ukgwu street.

“I objected because I was well known in that area, but Santiago and Chibukie went for the lady and they robbed and killed her after collecting the sum of N150,000 from her.

“We were five that went for the operation and I got N23,000 as my share. When we got home news came that the woman we robbed was dead.

“Then we all had a fight with Santiago for killing the woman and he told us that the woman was struggling with him and he was left with no other choice but to fire the shot.

“I used the money to travel to Abuja where I spent two weeks, but I was arrested when I returned to Aba. I didn’t know how the police knew I was involved in the operation, but I had no choice but to tell them all I knew.

“I also assisted in arresting six other members of our gang including Abraham our tricycle rider. But Santiago is still at large”, he stated.

25-year-old Uzoma Chiyere Samuel, who is from Obingwa area of Abia State, said he joined the gang because he needed money for his clearance in school.

“The Abia State Polytechnic student said; “I am 25-years old, I joined Vikings confraternity in 2016, it was Henderson who is in prison that initiated me.

“I later joined his robbery gang because I was looking for money to do my clearance in school. I can’t explain why Rafael killed the man because we met him outside and he didn’t struggle with us, it was when we were about leaving that I heard a gunshot and I saw the man lying in a pool of his blood.

“We all decided not to rob again but when we became broke Santiago suggested that we should rob the woman at Ogbor hill and when we went there he shot and killed the woman again.

“I knew we were into big trouble because the police would come all out for us. But before then I was part of the group that robbed a POS operator at School Road, at Uke hill junction and we got N50,00. But nobody was killed.”

In his own confession, Chibike Sunday Alabado, 22, said he joined the gang because he lost his job after the End SARS protest adding that he made N55000 from five robbery operations he took part in.

He said; “ I joined the gang in January 2021 and I have gone to five POS robbery operations with the gang and I got a total sum of N55000 from the five operations.

“I joined the gang because I lost my job during the End SARS protest and it was Rafael who introduced me to the gang. The gang and I don’t have any gun but Rafael had a gun.

Godswill Kalu, 23, native of Ohafia area of Abia state, in his confession said; “I am a generator repairer, but I was arrested for the crimes I committed. I went to two robbery operations with the gang.

“One of the operations was at St. Micheal area of Aba, where we robbed a warehouse and I got N17,000, as my share of the loot because we were five persons that took part in it.

“We went for another operation, where we robbed a POS vendor and I got N8000 as my share. Nobody was killed in all the operations I took part in and Rafael initiated me into Vikings and also lured me into the gang.”