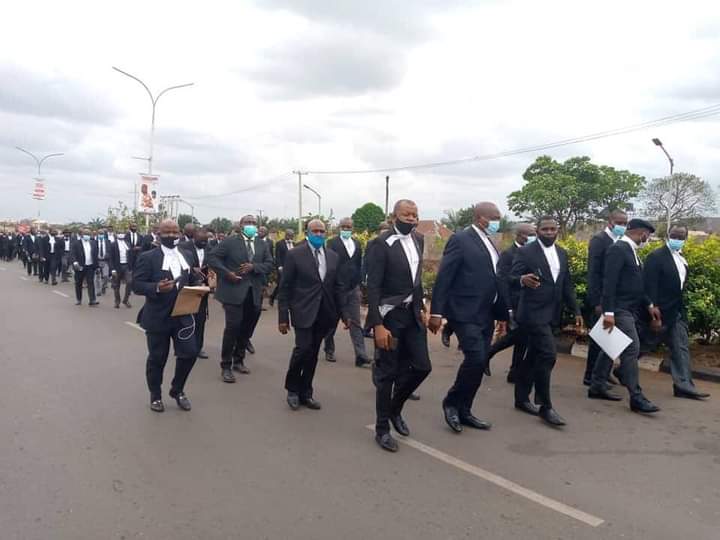 Legal practitioners based in Anambra State under the aegis of Nigerian Bar Association, NBA, are currently holding a peaceful march against the kidnap and murder of one of their members, Mr Francis Onwuachu, the late President General of Omor Community in Ayamelum Local Government Area.

The legal practitioners, in their hundreds, drawn from the seven NBA divisions in Anambra State, began the protest at the Anambra State Judiciary Headquarters, Awka, from where they marched to main gate of Anambra State Government House, Awka.

They also condemned the murder of the late PG, appealing to Governor Willie Obiano to nail the masterminds of the heinous act.

Mr Onwuachu, a lawyer, was kidnapped by suspected gunmen two Friday nights ago, and his corpse was found a week later after series of intensive and cordinated attempts by the state government through the various security agencies to rescue him alive.

Addressing the protesting lawyers, the Secretary to the Government of Anambra State, Professor Solo Chukwulobelu flanked by other senior government officials, assured them that the state government has already made intense efforts to nip the gruesome development, as the governor has pledged that those who want to distort public safety would be made to pay.

Note that Governor Willie Obiano had, yesterday, March 21, 2021, read a statewide address on the current security challenges in Anambra State, stating that every responsive action is being taken to checkmate the sudden trend and bring those who are bent on abridging the comparative peace that had existed in Anambra State over the past seven years to book, with preliminary arrests of suspects already made.

The governor also urged youths, market union leaders, community leaders and other stakeholders in the state to rise to the emerging security threats to protect the state against deadly incursions and help government defeat these enemies of peace.