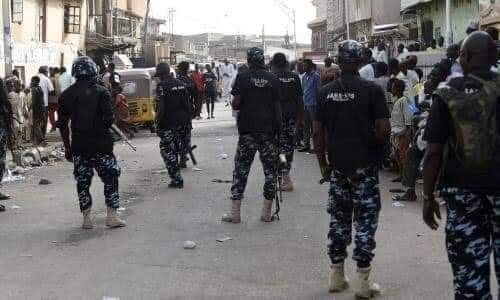 A policeman has shot and killed his colleague in Aba, Abia State while attempting to make an arrest.

The incident occurred at the popular Bata Junction linking the Aba main motor-park with the Ogbor-Hill and the Umungasi axis of the city.

The policeman, according to eyewitness, was trying to shoot a civilian for resisting arrest when he mistakenly shot his colleague.

Witnesses said the policemen were trying to force an occupant of a tinted sport utility vehicle (SUV) into their patrol van around Aba Sports Club axis when the incident occurred.

One of the witnesses said when the occupant of the vehicle resisted the arrest, one of the policemen drew his gun and mistakenly shot his colleague.

“When the policeman shot his colleague, they suddenly left the man they were trying to arrest and began attending to their colleague.”

“In the midst of the confusion, the suspect suddenly drove towards Sweet Fast Food and zoomed off. The policemen carried their shot colleague into their Hilux van and left. But from where I was watching, the police officer died instantly, except there was a miracle. It seemed the bullet hit him in the chest,” the witness said.

When contacted for response, The state Police Public Relations Officer (PPRO), SP Geoffrey Ogbonna, said that he was yet to be informed of the incident.