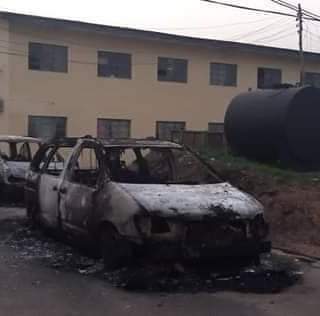 If Killer Herdsmen, Insurgents Can Be Rehabilitated, No Soul Deserves To Be In Prison— Nnamdi Kanu

Almost all the inmates in the prison were said to have been set free by the gunmen in the state in the over 3 hours gun battle.

Reliable sources confirmed that “the attacks were well coordinated. The gun men barricaded major streets and roads in Owerri, singing He (Jesus)is risen….go home, while leading the inmates and detainees out of the city in procession”.

The attack was said to have began at 1:30am on Monday.

There was said to have been heavy gunfire during the attacks.

The police command and some vehicles parked in the vicinity were set ablaze by the gunmen.

Ikeokwu Orlando, the police command spokesman, was reached by Journalists for comment on the incident, but he only said, ”I will get back to you”.

The source also said the operation lasted for close to three hours.

“At about 0100hrs of date, armed men suspected to be members of IPOB/ESN criminal gang in their numbers invaded Owerri Prisons mine using dynamites and other heavy explosives, gained entrance and released some inmates in the prison(details of the level of carnage done to the facility and the number of inmates released is yet to be confirmed),” the source said.

“The hoodlums also attacked the Police State Headquarters Owerri mine while firing consistently with AK 47 rifles and explosives, released some suspects detained in the SCID cell and put fire on so many vehicles parked at the Headquarter premises including the SCID office building. The onslaught/operation lasted close to three(3) hours.”

This comes as over 2,000 inmates at the headquarters of the Nigerian Correctional Service, Owerri, Imo State were set free by unknown gunmen.

Meanwhile, later Monday morning while Owerri was still burning, Soldiers in Ukwuoji checkpoint along Owerri/Onicha road escaped death as they ran away on sighting Unknown gunmen who invaded their checkpoint, allegedly set all the operational vehicle on fire.