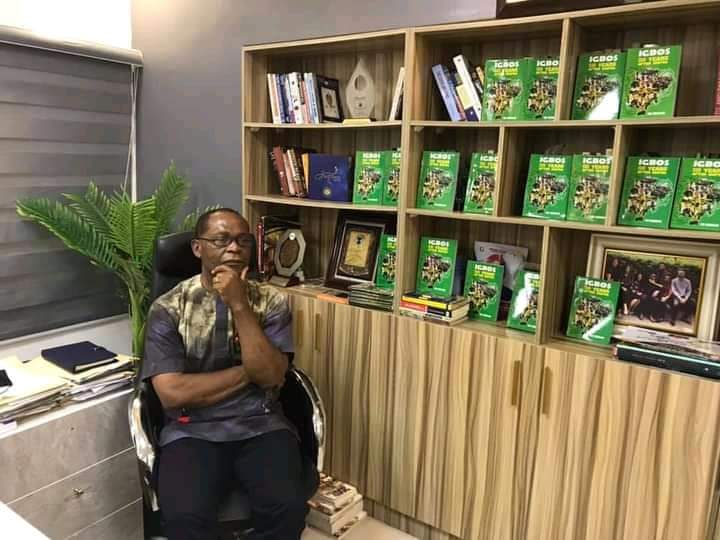 Special Adviser to the Lagos State government on Environmental Cleansing, Mr Joe Igbokwe and Ndigbo on social media clashed at his profile picture.

The battle of words started when Mr Igbokwe changed his profile picture with the picture of his new book titled “50 YEARS AFTER BIAFRA” soliciting for fund and distributors.

However, Mr Igbokwe never expected what he saw, when thousands of Igbo people stormed his profile picture with all manner of abusive words amounting over one thousand comments.

According to most people who commented on the picture, it was gathered that Mr Igbokwe always restrict his comments to his friends only who apparently are on the same click with him.

But, he was shocked, when thousands of people from the Eastern region stormed his profile picture calling him all manner of unprintable names.

Some of the comments reads “Mr Saboteur so you can actually open your comments section today. After ranting, come down to Biafra land. We must deal with you.

“Lagos State Commissioner for cleaning gutter and parking dustbin. Number one saboteur of our time you will get it hot from us today.

“Joe Igboju you are the most useless man on the surface of the earth. It’s time to sell your book, you now remember to open your comments section. Nobody will buy that junk you authored. Anywhere we see it in Biafra Land, we will set you and the book ablaze.

“Are you sure this man is truly an Igbo man? With the way he despise his people. Ifeajuna blood is truly running in Joe Igbokwe vein. No Igbo man will buy that nonsense book of yours. Sell it to Yoruba people, we are not interested.

“Anyday we set our eyes on you, that day you’ll regret coming to this world. Keep on supporting Hausa Fulani Jajanweed Almajiri born to rule government that can barely read nor write against your people. Onye eriri.

“Chai your mother must be regretting the day she gave birth to an efulefu like you. Keep that nonsense you called book to yourself. We are not interested.

“Igboju hope you are getting it hot today. I’m sure you never expected it to be like this today. Your only saviour is that your comment section you use to lock, if not you will be getting it hot from us everyday.”

However, others were tagging their friends and loved ones to come and comment as this is an opportunity to pour out their mind on Mr Igbokwe.

According to one Mr John Onyejiofor who tagged a friend to come and comment “Okechukwu Mark please come and comment your own oooooo before he restrict his comment section. It is hot here today. Joe Yorubakwe is getting it hot from ndi Igbo today” He said

Meanwhile, Joe Igbokwe who could not bear the insult and criticisms anymore said Nnamdi Kanu sent touts to come and attack him.

In his words,”It’s obvious Nnamdi Kanu sent all of you to come and attack me today. But bear it in mind that Kanu will never return to Nigeria again. Anyday this government set his eyes on him in this country, he will be apprehended and dealt with mercilessly according to the provisions of the law.

“Rant from now till the next 50 years, Biafra will never emerge. What do most of you Agbero touts know about history. When a child decides to work against his fatherland, if that child don’t restrict his intention, he will surely meet what is bigger than him” he said

However, most people who support Mr Joe Igbokwe on social media were nowhere to be found as the heat was much, thereby leaving Mr Igbokwe and ndi Igbo to battle the war against each other.