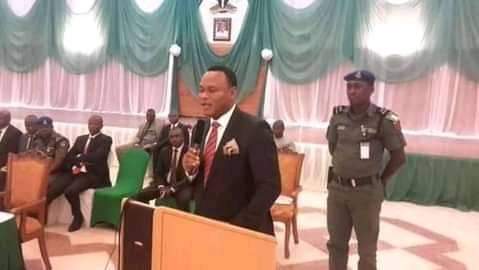 The Deputy Governor of Ebonyi State, His Excellency, Dr Kelechi Eric Igwe has declared that no member of Eastern Security Network should be seen around the State anymore.

The Deputy Governor made the remark during a meeting with some State government officials, Security agents and members of the press at the State Capital, Abakiliki.

Dr Igwe while addressing the crowd maintained that Ebonyi State is the most peaceful State in Igboland before Nnamdi Kanu came and flooded the State with terrorists against the Hausa Fulani cattle rearers who were doing their legitimate business in the State.

He further opined that Ebonyi State is open to all citizens of Nigeria and everyone is allowed to do their legitimate businesses in the State irrespective of tribe and ethnicity.

According to him, “This State is apparently the most peaceful and law abiding State in the entire Eastern region, but today it’s unfortunate some miscreants who said they are agitating for Biafra has destroyed the State completely with their proscribed terrorist group which the Federal Government banned.

“I stand to reaffirm that from today henceforth, no member of Eastern Security Network should be seen anywhere around the state again, as anyone who goes against the decisions of the State government will have himself to be blamed.

“Hausa-Fulanis and other ethnic groups in Nigeria can now do their legitimate business within the State peacefully as the State government in collaboration with the Federal Government has Marshalled out strategies on how to handle the so called ESN. Nigeria is for all and in Ebonyi no room for proscribed terrorist group” he said