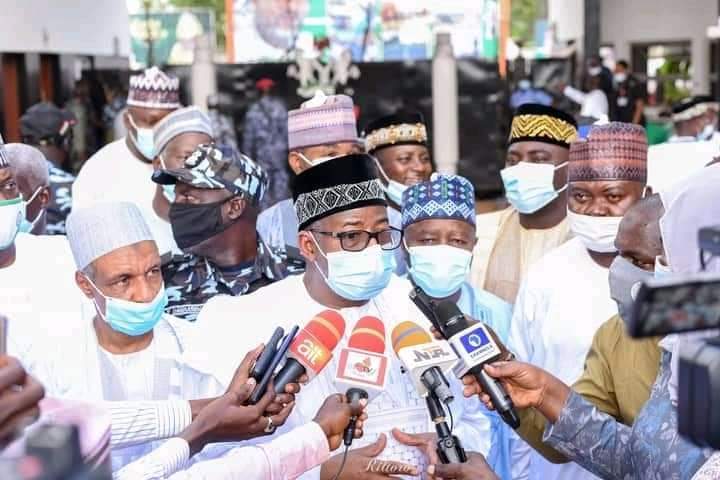 His Excellency, Governor Abdulkadir Bala Mohammed of Bauchi State on behalf of the entire State has reaffirmed their strong support to the Fulani herders, otherwise known as Miyetti Allah today at the State Government House, Bauchi.

Miyetti Allah internationally recognized as the 4th deadliest Terrorists group in the world, has been accused of several massacre and acts of terrorism in Nigeria. The group had constantly issued threat statements aimed at undermining state laws in Nigeria in the past.

Gov Mohammed made the remark during an open briefing with the Association of cattle rearers, Farmers Association, some Village heads, Political office holders and Representatives of the Nigerian Police Force and other Security Agencies in the State.

Gov Mohammed drum support for the leadership of the Miyetti group, while he encouraged them to go about their lawful businesses without any fear.

He also took a swipe on the Southern Governors who has been calling the Federal Government to declare Miyetti Allah as a Terrorist group based on their activities over the years.

According to him, “I wonder why most Governors in Nigeria want to pluck this country into a state of Anarchy and confusion. What gain will they derive from it.

“We also know how useful and important cattle rearers are to us in this country. Most people today can’t eat nor sell their businesses without meat and still they are calling on Federal Government to proscribe the people supplying the meat for them.

“Both the East and the West are shouting proscribed Miyetti Allah as a terrorist group even when the Federal Government has not said so. Because before you proscribed a group as a terrorist organization, you must have facts and concrete evidence while such a group should be proscribed.

“You can’t just come up on the internet with adulterated photos and videos even from other countries of the world and you now want to use it against innocent herders.

“As far as Bauchi State and other Northern States is concerned, Miyetti Allah is never a terrorist group but a law abiding group carrying out their lawful businesses within the country peacefully” he said.

However, after the Governor’s speech, there was joy and celebration all over the place by the Miyetti Allah and the Farmers Association. The Association thanked the Governor for being with them in this trial time and promised to abide by the rules and regulations governing the Nigerian State.