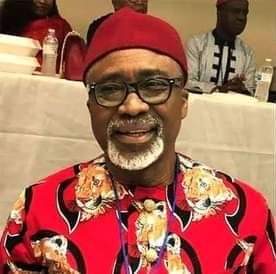 The Senator representing Abia South Senatorial District at the red chamber of the National Assembly, Distinguished Senator Enyinnaya Abaribe earlier today rebuked the Governor of Bauchi State, His Excellency, Alhaji Bala Abdulkadir Mohammed over his recent speech where he declared that Miyetti Allah Cattle Rearers Association is not a terrorist Organization.

His reply was said to have come after an open briefing held at the Bauchi State House yesterday by Governor Mohammed and the Hausa- Fulani herders, Farmers, and Security agencies where the Governor declared support for the Miyetti Allah Organization and announced that Miyetti Allah Cattle Rearers Association is never a terrorist organization unlike the proscribed IPOB.

However, Senator Abaribe while addressing men of the press earlier today rebuked Governor Mohammed for supporting evil in the land and inciting the Hausa-Fulani to kill more people all in the name of cattle rearing.

According to him,”It’s obvious the whole world can now see those sponsoring the Hausa-Fulani herders known as Miyetti Allah Organization to go about destroying people’s farms, raping our women and killing innocent souls all in the name of cattle rearing.

“Some people will come and say Nigeria is one all for their selfish interests. How can Nigeria be one when a sitting Governor of a State come out openly and declare a group who has been killing people on daily basis as non terrorist organization but are happy when President Muhammadu Buhari led Government proscribed IPOB who were agitating for freedom without gun or matchet a terrorist group and tomorrow someone will come up and say Nigeria is one.

“Never! We cannot continue to keep silent over all these rubbish happening in this country anymore. If the Federal Government wants to kill all of us, they should go ahead because we won’t stop pointing out the evils of Hausa-Fulani herders backed up by their so called leaders are doing in this country.

“The Southerners are we second class citizens in this country. Can an undergraduate in the Northern States stand a Secondary school student in the South in an examination or open interview. So why are we relegated, why are we dehumanized, why are they killing us gradually, why why why. Enough is enough.

“Are you trying to tell me that the Presidency didn’t watch what happened in Bauchi where a sitting governor was praising an internationally recognized terrorist organization Miyetti Allah, yet they refused to proscribed them. Maybe when they have finished killing all of us in this country, the Presidency can now come out to say we are not aware. But before that will happen, I don’t think the Southerners can take such rubbish from them any longer. Enough is enough.” he said