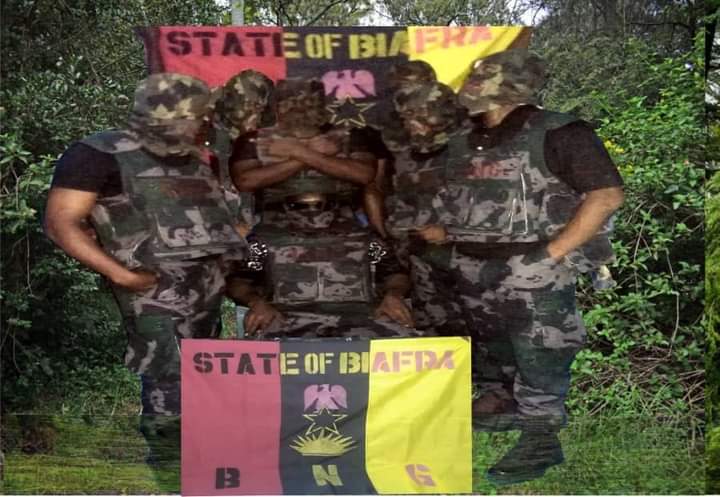 After extensive deliberations and consultations, the Biafran Supreme Military Council of Administration {BSMCA} comprising of BNG Head, the Provincial Adjutant(s) and Acting Administrator(s) of the Biafran Army, Biafran Navy, Biafran Air-Force and Biafran Detective Force vows to hoist the Biafran Military Flag of Authority which will officially signify the change from Transitional to Provisional government and the total takeover of Biafra territories beginning from May 30th 2021.

The BSMCA states that the Biafran National Guard {BNG} will kick start her activities in defunct Anambra state, emphasizing that the slated November governorship poll will not be allowed to hold and the defunct state shall nonstop be disrupted from been governed in any form affliated to the Nigeria State.

The Nigeria security forces must desists from authorizing arrest, patrol, checkpoint or show of uniform in Biafra territory.
Also, this is to forewarn that the Nigerian flag is therefore banned and must not be seen hoisted or displayed in any part of Biafra territory or there shall be severe consequences against those who flouts the order.

BNG shall pay everyone involved in the subjugation and circumvention of justice of these Biafran prisoners of conscience in their own price not forgetting all of the prosecuting counsels, trial judges and politicians.

The Council observed that the Nigeria State is known to be synonymous with the abuse of human rights and the noncompliance to the earlier deadline given for the release of these prisoners of conscience was expected enabling BNG which is made up of the Biafran Army, Biafran Navy, Biafran Air Force and Biafran Detective Force to get their personnel mobilized, oriented and ready for the task ahead.

Depicting the recent activities of the so-called unknown gunmen as kindergarten compared to the mayhem that shall be unleashed by the Biafran National Guard on the Nigeria State including its parastatals and installation located in Biafra territories.

These vengeance shall be launched from defunct Anambra state for the arbitrary violation of the fundamental freedom and human rights of these Biafran prisoners of conscience for over fifteen (15) years. Why should innocent women be made to suffer for the supposed crime of their husbands? Even among those incarcerated is a pregnant woman who has not set sight on her child since she gave birth in prison.

BSMCA hereby extends the deadline for the unconditional release and compensation of these Biafran prisoners of conscience held in the Onitsha and Awka Prisons, to the last day of May 2021.

Beseeching the Biafran Transitional Parliament to approve the list of Administrators for the various Departments of the Biafran Army, Biafran Navy, Biafran Air-Force and Biafran Detective Force which was forwarded for screening to the Upper and Lower Chambers.

The Council called on every Biafran men and women still serving the Nigeria State security forces to resign henceforth as the grace given will expire after the hoisting of the Biafra Military Flag of Authority. BNG will not be held accountable to whatever action that shall be taken against any Biafran that continues to serve on the side of the Nigerian security forces.

A secured channel has been made available to those that want to be part of whichever Departments of the Biafran National Guard. Every Biafran youth must desists from joining whatsoever security or vigilante group formed by politicians or lose their lives.

Furthermore, BNG will not partake in any negotiation or meeting of pro-Biafra groups initiated or facilitated by any Igbo politicians or groups and hereafter will not tolerate any utterances against the restoration of our sovereignty, it is either you are supportive or remain silent.

The Council shall also not tolerate any betrayal or sabotage from any religious or traditional leaders domiciled in Biafraland but encourages them to be outspoken and fearless in support of our freedom.

The Council implores the people of Biafra to be patient and tolerant as events unfolds because it shall become uncomfortable and severe but these are price that must be paid for our freedom.

Furthermore, this is to inform all and sundry from 27th – 30th of October 2021, a live broadcast of the Biafran National Guard shall be delivered by the Provincial Government where the future of the sovereign state of Biafra shall be unveiled.

Congratulations in advance to every Biafran Citizens on our independence.